Playstation«4 Launches in The UK with Packed Out Midnight Opening At PS4? Lounge #4Theplayers 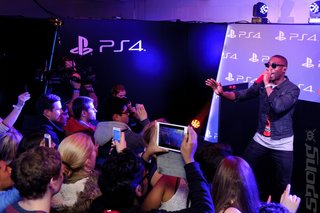 All Images (45) »
PlayStation«4 officially launched in the UK last night and gamers up and down the country came out in their thousands to celebrate finally getting their hands on the long-awaited next generation console.

At the PS4? Lounge #4ThePlayers in Covent Garden, hundreds of fans queued through the night, and some from as early as Tuesday afternoon, to pick up pre-orders and purchase a limited number of stock that was available to buy on the night.

PS4 is the most powerful games console ever made, ten times more powerful than the PS3. It offers rich, high fidelity graphics, is designed for immediacy with minimal barriers between the player and the game, and boasts full social integration with a dedicated Share button built into the new DUALSHOCK« 4 controller.

Blaine Smith, 25, from Bedford, was the first person in the UK to pre-order his PS4 via GAME back in February. At the PS4 Lounge midnight launch he was given the ultimate reward of becoming the first person in the country to get his hands on the new console, which was presented to him by Tinie Tempah and Sony Computer Entertainment?s Global CEO, Andrew House.

?I am delighted to have played a part in one of the biggest launches in gaming history?, Blaine said. ?The early bird most definitely catches the worm, and I?m so happy to finally have PS4 in my hands after ordering it so long ago. Despite queuing through the night I went straight home, set it up and started playing immediately?I just couldn?t wait any longer!?

Imran Chowdri from London, was the first person in the queue to buy the limited free stock, and showed incredible levels of dedication by queuing since 4pm on Tuesday afternoon. Imran said; ?It was always my goal to try and be one of the first people to get hold of a PS4 and I am so happy to have now achieved that. I didn?t get a chance to pre-order before they sold out so I decided I just had to get down here, it certainly takes a lot of commitment and it?s been a very cold wait ? but it all feels worth it to be able to walk away with my PS4?.

Gamers at the PS4 lounge were treated to an exclusive performance from Tinie Tempah just before the clock struck twelve. Tinie says: ?I'm honoured to be part of gaming history at the launch of the new PS4. I'm a huge gaming fan and have been anticipating this day for months. The crowd was amazing and I could feel the excitement in the room as gamers geared up to pick up their PS4s.?

Fergal Gara, PlayStation Managing Director comments: ?PS4 is here, and it?s brilliant to see so many people so happy. The response we?ve had has just been amazing, and this looks all set to be a record-breaking launch. And this is just the beginning ?we?re looking forward to delivering amazing new games our customers can enjoy for months and years to come.?

Ian Chambers, GAME Chief Digital Officer adds: ?The passion and excitement displayed by the gamers that attended the PS4 Lounge #4ThePlayers and more than 300 GAME stores nationwide last night was incredible. It?s been years in the making, and the arrival of PS4 marks a real highlight in this truly epic season of gaming.?

We?ve seen record pre-order numbers for the PS4 and looking at the initial response it?s clear that sales will easily top those delivered at the PS3 launch.?


For more information and assets please email playstation@feverpr.com or call 020 7792 7488 and ask to speak to a member of the PlayStation team

More information about PlayStation products can be found at www.playstation.com.
PlayStation, PS4, PS3, PS2 and PSP are registered trademarks or trademarks of Sony Computer Entertainment Inc. All other trademarks are property of their respective owners