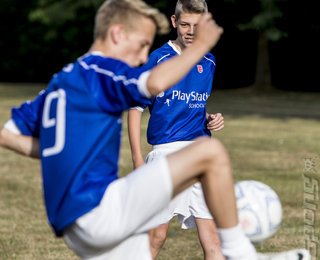 All Images (3) »
PlayStation?s previous track record for supporting grassroots football is set to get bigger than ever before, following the new partnership with the English Schools? FA.

Tottenham Hotspur captain Michael Dawson helped mark the return of the PlayStation Schools? Cup, which will help increase both boys and girls tournaments for the U12 ? U15 secondary school age categories, with over 2,000 schools and 100,000 participants throughout England all set to benefit from the programme.

Michael Dawson said: ?I still had fond memories representing my school at sport. The PlayStation Schools? Cup tournaments will provide an important learning curve, where youngsters can test themselves against quality opposition, playing under competitive circumstances. The main thing is that they go out and enjoy their football. I urge all kids to get out there and give it a go.?

To celebrate the launch of the PlayStation Schools? Cup, each school involved can now look forward to receiving a PlayStation Kit Bag, featuring a match day football, training bibs and supporters? flags. There is also a chance for budding young journalists to put their creative writing skills to the test when they take part in the e-reporter competition that sees pupils submit match day reports online to website www.playstationschoolscup.com.

PlayStation UK Marketing Director, Murray Pannell, explained: "We are delighted to partner with the ESFA to deliver the PlayStation Schools? Cup tournaments to close to 2,000 schools. PlayStation has a great tradition for supporting schools? football. We recognised that working with the ESFA would help increase the number of schools that benefit from our support. It was important for us that both boys and girls teams from ranging abilities will enjoy the honour of representing their school, which is a proud occasion for them to cherish.?

The U-12 to U-15 secondary schools? finals will take place at the PlayStation Schools? Cup Festival in May, 2014. The action packed festival will host a range of football themed activities that all the family can enjoy, while providing a fitting finale to the schools? football season. Adding to the occasion, each school that reaches the final of their respective tournament will be rewarded with a brand new PlayStation football strip for their team.

ESFA Chief Executive, John Read, said: "The PlayStation Schools? Cup announcement is exciting news for both the ESFA and thousands of schools throughout the country. This partnership with PlayStation means we have all the ingredients in place to make a real difference at a grassroots level, delivering a professional structure for children to enjoy playing football.?

PlayStation, PS4, PS3, PS2 and PSP are registered trademarks or trademarks of Sony Computer Entertainment Inc. All other trademarks are property of their respective owners