Shrek speeds onto the Game Boy Advance in racing adventure for TDK Mediactive. 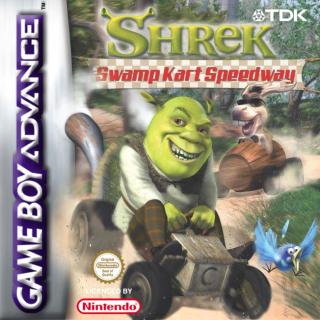 February 14, 2002, TDK Mediactive Europe, a division of TDK Recording Media Europe S.A., today announced that it's highly anticipated sequel to the chart topping Shrek - Fairy Tale FreakDown, which sold an incredible 130,000 units across Europe, will race to UK retail on April 12, 2002. Shrek - Swamp Kart Speedway for the hugely successful Game Boy Advance platform from Nintendo will be the second title to be released themed on the blockbuster DreamWorks feature film.

Shrek from DreamWorks was one of the highest grossing films of 2001 and has a current cumulative UK box office figure of over Ł28 million, sitting at no. 29 in the Top Grossing Movies of All Time Worldwide Box Office Charts. It is also the fastest selling DVD/VHS with current sales topping 3,120,034 in the UK alone.

Barry Stearns, National Account Manager for TDK said: "Shrek - Swamp Kart Speedway will take UK retail by storm when it is released just before Easter this year. It's a fun, quirky and entertaining game that with its good-natured combat racing and tongue-in-cheek humour, will appeal to Shrek and Game Boy Advance fans everywhere."

Shrek has always loved his home-sweet-swamp, but ever since Lord Farquaad declared his land the "Kingdom's Grand Dumping Ground" there has been more junk around than any swamp needs. So, Shrek has gathered up what he could find and made himself a lean, mean ogre kart. Now Shrek and the fairy tale troops are ready to compete in the craziest, most twisted roadster challenge ever. The question is who will be victorious in the race for the Dragon's treasure?

Shrek Swamp Kart Speedway, a racing adventure title for the Game Boy Advance, boasts a myriad of exciting tracks, including flat and rolling terrain and challenging hairpin turns. With special power-ups and magical shortcuts, players can enhance the chance of winning races, but driving skill and racing strategy will still win the day.