Unspeakable horrors are all around you, and not just on stage at a Pop Idols concert in Interplay's latest action-fest, Hunter: The Reckoning. 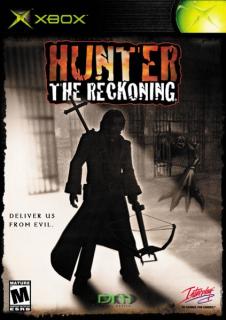 Monsters are everywhere disguised as normal people all around you - but only Hunters can see them for the horrors they truly are. This is the premise behind Interplay's new blood-soaked, third-person action-horror title, Hunter: The Reckoning out in June 2002 on Xbox.

Based on the immensely popular pen and paper role-playing game from White Wolf, Hunter: The Reckoning gives fans a chance to live out their zombie-slashing fantasies in a pacemaker-exploding Xbox game.

The plot revolves around the idea that monsters are all around us, all the time, but the public are unaware of their existence. Werewolf attacks are explained away as rogue bears in parks and a vampire's next feed is merely a statistic on the missing persons list.

There are certain members from all aspects of society who are blessed (or cursed) to see through the deception and these few are the ones with the responsibility of keeping the rest of humanity safe. They are the Hunters.

Gamers can choose from four characters, each representing a different creed or type of Hunter. Each has unique moves, magic abilities and weapons. With the differences comes a need to fight the undead masses tactically, using the strengths of the chosen Hunter.

Better still, four players can fight side-by-side simultaneously through 23 different environments, including a derelict prison, a graveyard and a gothic church. It won't be an easy ride, however, with up to 30 monsters on screen at any one time.

Sharpen your axe and oil your shotgun. There'll be a lot of undead nasties to wade through when Hunter: The Reckoning is published by Interplay and distributed by Virgin Interactive this June.