A new Lara Croft for a new generation. 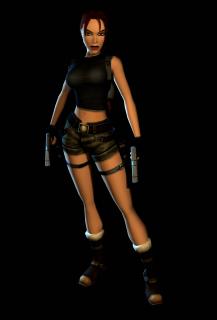 Eidos Interactive and Core Design announce the return of the world's most famous video game character in Lara Croft Tomb Raider: The Angel of Darkness. The game will be released on PlayStation 2 and PC towards the end of 2002.

Lara Croft Tomb Raider: The Angel of Darkness is classic Lara as both hunter and hunted relying on her ingenuity, athleticism and a new edge that has arisen from her dark inner demons. However, this time she faces more evolved characters and situations, calling for more involved decision-making. Lara now has the ability to interact with characters and the choice of which path to take. Upgrading her trademark style and look and dropping her into a bombshell scenario calls for a new resourcefulness making her a stronger and more complex heroine.

Adrian Smith, Operations Director at Core Design says, "Our vision is to take the player somewhere dark, a place they might not necessarily wish to go, but a place they will have to venture if they are to bring Lara back. Lara will have some tough moral choices to make. It's no longer a clear-cut case of good versus evil - this is a more complex tale, which will ask more complex questions of the player. It will be a new experience for people who have played Tomb Raider in the past."

The game employs a brand new engine built from the ground up to fully utilise the power of PlayStation 2 and the latest PC graphics cards. Lara is now made up of over 5,000 polygons as opposed to just 500 in previous Tomb Raider games. She must traverse an intricately detailed world, which takes her from the back streets of Paris to the hellish depths of Prague.

Lara has changed since her experiences in Tomb Raider: The Last Revelation. She has become darker, harder, less tolerant and her tomb raiding days are a distant memory. A desperate phone call from her former mentor Von Croy leads her to Paris. Von Croy has been asked by a sinister client, Eckhardt, to track down one of five 14th century artworks - the Obscura Paintings. She arrives in Paris to find a city in fear. Von Croy has been the victim of a horrific murder and framed for the crime, Lara has no option but to go on the run.

During her exploits Lara encounters a kindred spirit in Kurtis Trent, a hardened adventurer like herself, who is in pursuit of Eckhardt. In her struggle to unravel the trail left by Von Croy, Lara becomes involved in underworld deals, grotesque murders, the dark side of an advanced form of alchemy and a history of blood, betrayal and vengeance spanning across hundreds of years.
Companies: Core Eidos
People: Adrian Smith
Games: Lara Croft Tomb Raider: The Angel of Darkness