The world?s most authentic military simulation returns this September 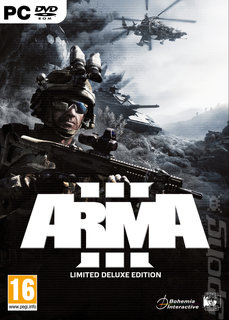 Special Edition
All Images (3) »
Morphicon and Koch Media today announces that ArmA 3, the next instalment in Bohemia Interactive?s award-winning tactical military simulation series, will release on September 12th 2013 for PC.

Boasting a maps that scale to almost 300km˛ ArmA 3 offers the largest battle area of the series and features over 20 different vehicles, aircrafts and ships. In addition players will be able to customize their character with a range of military equipment and over 40 weapon types. The editing tool will allow gamers to design new scenarios and create mods that can be shared with the ArmA community. In addition to the 12 showcase missions and 10 firing drill challenges, players will also be able to team up against the enemy in competitive and co-op battles in multiplayer mode.

Developed by Bohemia Interactive, ArmA 3 will launch on PC on September 12th 2013.

About Morphicon
MORPHICON publishes its games portfolio under the label PETER GAMES which stands for highly innovative, cutting-edge interactive entertainment. Thanks to close collaboration with a wide range of development teams, MORPHICON was once again able to improve their market position in 2012.

MORPHICON LTD. was founded in Reading, Berkshire, England in 2004, and established a branch office in Munich, Germany not long after. With the subsidiary MORPHICON MEDIA AG, founded in 2010, we are also expanding into the browser / social games market.

MORPHICON is going to further grow its portfolio in 2013 while MORPHICON and PETER GAMES are going to press ahead with the digital distribution of their products and the acquisition of marketing rights for both Europe and worldwide.

Since its introduction in 2008, the Peter Games Classics series has become a strong player in the market for budget games. More than 50 titles of the series can now be found in over 1,800 specialist stores and retail outlets all over Germany, and as many as 20 Peter Games Classics titles have made the top 20 of the budget charts so far.

In addition to our successful budget games range, we launched three number 1 hits for PC in the full-price segment: Armed Assault, ARMA 2 and ARMA 2: Operation Arrowhead.

About Koch Media
Koch Media is a leading producer and distributor of digital entertainment products (software, games and films). The company's own publishing activities, marketing and distribution extend throughout Europe and the USA. The Koch Media group has more than 18 years of experience in the digital media distribution business, and has risen to become the number one distributor in Europe. It has also formed strategic alliances with numerous games and software publishers: Bethesda, Capcom, Kaspersky Labs, NC SOFT, Sega, Square Enix and Tecmo-Koei, etc. in various European countries. With Headquarters in Planegg near Munich/Germany, Koch Media owns branches in Germany, England, France, Austria, Switzerland, Italy, Spain, the Nordic regions, Benelux and the USA. [url=http://www.kochmedia.com ]www.kochmedia.com[/url]