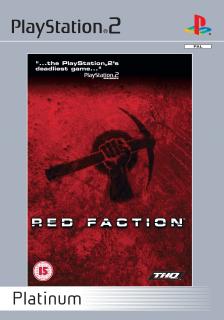 THQ Inc. today announced its critically acclaimed Red Faction for PlayStation 2 computer entertainment system, is to be republished as part of the launch line-up of the PS2 ?Platinum? collection across Europe.

The ?Platinum? collection will feature some of the best-selling games that have made maximum impact on the PlayStation 2. The Platinum republished edition Red Faction, will debut in the shops from 1st March, at Ł19.99.

Ian Curran, Managing Director of THQ UK/Export, commented, ?We are very proud of Red Faction?s exceptional achievements, particularly given the half-million PS2 installed base when the game was launched. With well over two million PS2?s out there in the UK now, the inclusion of this key title into the Platinum range will introduce many more gamers to this incredibly innovative title. With Red Faction 2 (working title) due for late 2002, the original?s reduced price point can only grow the potential for this exciting sequel, and crown jewel in our portfolio of internal brands.?

Red Faction 2 introduces a mass of new features and improvements, based around a gripping storyline. Players will have to complete multiple mission objectives, using an arsenal of weapons and other items. Red Faction 2 will also allow players to utilise different vehicles and fight alongside elite squad members each with their own attack attributes. Redefined graphics, an auto-save function, enhanced enemy AI and dynamic environments will also be featured in Red Faction 2. New additions to the game?s multi-player action will include four-player split screen, customisable computer opponents, and new game modes.
Companies: THQ
People: Ian Curran
Games: Red Faction Red Faction 2