Too Hard for Coulthard 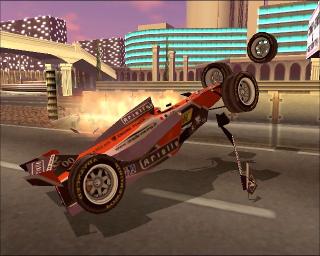 All Images (2) »
In the near future motorsport has become dull - too many rules and regulations mean that all the excitement has gone from the sport.

A few adrenaline-hungry drivers decide to break away and form their own high octane racing league. Enter the world of Downforce on PlayStation 2.

Topping up the excitement quota, all the tracks are based in real world cities. No more deadly-dull Hockenheim to ruin all the fun. It?s like Monaco every time you race, with 21 different routes in 8 spectacular locations: Tokyo, Las Vegas, Sydney, Singapore, Florida, Hong Kong Airport, plus 3 hidden tracks including Toronto and Geneva.

Downforce on PlayStation 2 concentrates on making street racing exciting - ignore the regulations and break the rules as you go for all-out racing thrills in super cars that make McClaren look like Skodas.

Downforce is developed by Smart Dog and will be published by Titus and distributed by Virgin Interactive this May for Playstation2.
Companies: Smart Dog Titus VIE
Games: Downforce