Prepare Yourself for the Apocalypse with The Walking Dead: Survival Instinct Pre-Order Bonus DLC 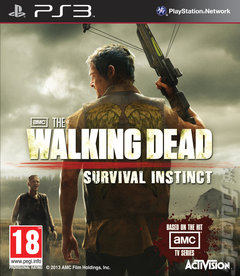 London, UK - 7th February 2013 ? Any advantage could mean the difference between life and death in the terrifying world of The Walking Dead: Survival Instinct, where every path, action, and choice has a consequence. Activision® and Terminal Reality today announced that players who pre-order the game on Xbox 360® or PlayStation® 3 from GAME (UK) or GameStop (Republic of Ireland) will get a jump on the end of the world with an exclusive DLC pack:

· Walker Herd Survival Pack ? In this exclusive DLC pack you will have access to the all-new Herd Mode where you need to fight for survival against endless waves of walkers. The dead need no rest ? will you? In addition, fight off walkers in the story mode with a new arsenal of melee weapons including a survival knife, sawtoothed machete, kukri, reinforced hatchet and advanced machete. With ammo scarce and the undead attracted to loud noises, a sharp, silent blade might just be your most trusted companion (note: a new game must be started to access the extra weapons).

The Walking Dead: Survival Instinct is a do-whatever-you-need-to-survive first-person action game that brings the deep, character-driven world of AMC?s Emmy®Award-winning TV series onto console gaming systems and the PC. The game follows the mysterious, crossbow-wielding survivor Daryl Dixon, brought to life by TV series star Norman Reedus, alongside his overbearing brother Merle, voiced by Michael Rooker, on a haunting, unforgiving journey across the Georgia countryside. Players will need to tread carefully on this desperate quest, scrounging for food, water, and ammunition to survive against nightmares both living and undead.

The Walking Dead: Survival Instinct is scheduled to be released in March for the Xbox 360®, PlayStation® 3, Wii U?, and PC. It is rated PEGI 18. For more information, visit www.TheWalkingDeadBegins.com or ?Like? The Walking Dead on Facebook (facebook.com/TheWalkingDeadAMC). The Walker Herd Survival Pack is unlockable for Xbox 360® and PlayStation® 3 exclusively through GAME (UK) and GameStop (Republic of Ireland) while supplies last. Limited time only. Code received when game is available.

AMC?s ?The Walking Dead? is based on the comic book series written by Robert Kirkman and published by Image Comics. It tells the story of the months and years that follow after a zombie apocalypse. It follows a group of survivors, led by police officer Rick Grimes, who travel in search of a safe and secure home. In the US, ?The Walking Dead? is the first cable series in television history to reign as the biggest show of the autumn season among Adult 18-49 rating, beating all broadcast and cable entertainment series.