TEAM BASED SHOOTER INNOVATES THE GENRE WITH TACTICAL MAP SYSTEM 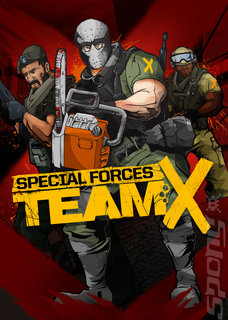 Special Forces: Team X (STX), developed by Zombie Studios, creators of the hit ?Blacklight? series, is a fast-paced tactical 3rd person shooter with a twist. Throwing customization fully into players? hands, STX features a real time map selection system where the battlefield is divided into three zones, with the layout of each determined by the teams prior to the match. Over one hundred possible combinations give every match a unique look and feel, for a constant tactical challenge.

Become an elite marksman and build the perfect load-out through customizable skillsets using distinct tactics and special abilities to defeat the deadliest enemies. Create and upgrade an arsenal of lethal weapons, including from rocket launchers, grenades, machine guns, and exclusively licensed weaponry like the Kalashnikov, Famas, and Sig Sauer; there are even attack dogs that can be unleashed into battle. Equipped with real-world weapons, take charge and head into battle with 5 multiplayer modes that include new gametypes like Hot Zone and High Value Target, each supporting 2, 3 or even 4 teams.

As a special partnership, Microprose is teaming up with Gameservers in celebration of STX?s release into the digital marketplace. Gameservers will be hosting dedicated servers 24/7 for the Windows-based PC version, available in North America, Europe, and Australia. For more information, please visit www.gameservers.com.

ABOUT MICROPROSE
http://microprose.com/
Microprose (formerly Interactive Game Group, LLC. (I2G)) produces and acquires video games and other interactive entertainment properties, whether packaged media, online, or wireless; joining forces with the best studios, publishers and distributors for each project on a worldwide scale. As a member of the Cybergun group, Microprose has revived a brand with a long history in the videogame space.

ABOUT ZOMBIE STUDIOS
http://www.zombie.com/
Founded in 1994, Zombie Studios is a leading independent video game developer located in the heart of Downtown Seattle. With over 30 shipped products, Zombie has built a track record of being on the forefront of the interactive entertainment industry creating award winning products for Xbox 360«, PlayStation 3, Windows« PC, and mobile devices, including the recently released Free to Play game, Blacklight: Retribution.

In addition to entertainment games, Zombie Studios has been an industry leader in Serious Games development since its inception. Zombie has successfully deployed over 20 Serious Games products in the last five years alone, with applications for basic first aid instruction, data visualization, land navigation, US Army recruitment, weapon familiarization, helicopter and tank simulations, multi-vehicle convoy trainers, live fire CQB training, and many others.

ABOUT CYBERGUN
http://www.cybergun.com
Cybergun is a world leader in creating replica AIR SOFT GUNS«. These are safe replicas, firing 6mm plastic pellets. AIR SOFT GUNS« faithfully reproduce the real firearms under which they are licensed. Initially obtaining licenses from the top manufacturers Smith & Wesson« in 1997, followed by COLT«, SIG SAUER«, DESERT EAGLE? and many others, today, the portfolio contains over twenty world-exclusive licenses, ensuring the company's position as a global leader. The acquisition of I2G-Microprose in 2011 has opened the door for Cybergun to position itself in the world of video games.