Experience the sniping genre's elite with better interactivity than ever before 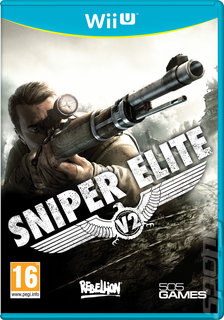 All Images (3) »
Milton Keynes, UK ? 505 Games, a global publisher of video games, and independent game developer Rebellion today announced that they will be bringing smash hit Sniper Elite V2 to Nintendo?s new Wii U? console with all new controls and a level of interactivity only possible with the Wii U? GamePad touch screen.

Players will enjoy the same thrilling, visceral experience as they guide American OSS agent Karl Fairburne around historical locations throughout Berlin and attempt to unravel the mysteries and dangers of the German V-2 rocket program but now with even greater tactical depth and flexibility thanks to brand new functionality through the GamePad ? tag enemies and booby-traps, track enemy locations and activity, even monitor the blast radius of planted explosives ? all with a glance at the touch screen and without leaving the battlefield for even a second.

Jason Kingsley, CEO of Rebellion said ?Sniper Elite is just the kind of mature game that is perfect for the different mechanics of the Wii U. It?s been a challenge to get it right, but thanks to our team and the fantastic support of our partners at 505 Games we believe we?ve brought the unique gameplay to a whole new platform.?

Sniper Elite V2 places an emphasis on learning to handle the anticipation and pressure of the hunt and using skill, patience and cunning in order to achieve mission goals. Featuring detailed sniping simulation with advanced ballistics, gamers must use their environments and take into account gravity, wind, aim stability and more. The celebrated ?kill cam? from Sniper Elite makes its return and is more gratifying than ever - skilful shots are rewarded with a slow-motion sequence of the bullet running its full trajectory before the target is rendered in graphic x-ray detail, showing the bullet entering the body and causing lethal damage.

Developed by Rebellion, Sniper Elite V2 will be releasing for the Nintendo Wii U? system in Spring 2013 and was previously available on the Xbox 360® video game and entertainment system from Microsoft and PlayStation®3 computer entertainment system and is rated 15 by the BBFC.

The Windows PC version is available for download at http://store.steampowered.com/app/63380/

For more information about Sniper Elite V2 and to access the game?s official forums please visit http://sniperelitev2.com l. Be a part of the conversation and get updates at http://twitter.com/sniperelitev2 and http://www.facebook.com/sniperelitev2

About 505 Games
505 Games is a global video game publisher focused on offering a broad selection of titles for players of all ages and levels. The company publishes games on all leading console and handheld platforms as well as for mobile devices and social networks. Product highlights include Zumba® Fitness, the Cooking Mama World series, Rugby World Cup 2011, Naughty Bear and IL2 Sturmovik: Birds of Prey.

505 Games is headquartered in Milton Keynes, UK with offices in Los Angeles, Lyon, Munich, Milan and Madrid and a network of distribution partners within the Nordic territories and Australia. For more information on 505 Games and its products please visit www.505games.com.

About Rebellion
Rebellion is one of Europe's leading independent video games developers and comic book publishers. With a diverse portfolio of publisher-owned and internally developed IPs, with hits such as worldwide number one Aliens vs. Predator, Star Wars BattleFront, The Simpsons Game and Sniper Elite, Rebellion prides itself on its unique and innovative approach to IP development and stewardship.

Kinect, Microsoft, Windows, Xbox, Xbox 360, Xbox LIVE, and the Xbox logos are trademarks or registered trademarks of the Microsoft group of companies.