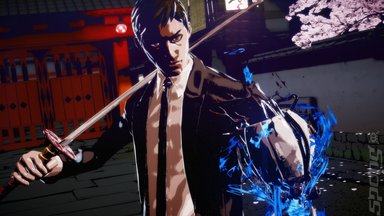 Following ?LOLLIPOP CHAINSAW,? KADOKAWA GAMES has been working together with GRASSHOPPER MANUFACTURE INC. and executive director SUDA51 on development for this title.

KADOKAWA GAMES today announced a partnership with XSEED Games to bring ?KILLER IS DEAD? to North America. Additionally, KADOKAWA GAMES and Deep Silver, the games label of Koch Media, a leading producer and distributor of digital entertainment products, will bring the title to the countries of Europe and Oceania.

?KILLER IS DEAD? is expected to launch worldwide in Summer 2013 for PlayStation«3 and Xbox 360.

About ?KILLER IS DEAD??
?KILLER IS DEAD? is set in a not-so-distant future similar to (but not the same as) the world we know now. The player takes control of an executioner named Mondo Zappa who wields a Japanese sword in his right hand and brandishes interchangeable weapons in his left artificial arm. His ultimate goal is to execute various heinous criminals scattered around the world and beyond.

Completely unique visuals and outstanding stylish action come together to deliver an unprecedented gaming experience in ?KILLER IS DEAD.? This brand-new action title is being jointly developed by KADOKAWA GAMES and GRASSHOPPER MANUFACTURE, with SUDA51 lending his trademark sense of style at the helm. It will be available worldwide in Summer 2013.

About Deep Silver
Deep Silver develops and distributes interactive games for all platforms. The Deep Silver label means to captivate all gamers who have a passion for thrilling gameplay in exciting game worlds. Deep Silver works with its partners to achieve a maximum of success while maintaining the highest possible quality, always focusing on what the customer desires.

Deep Silver has published more than 200 games since 2003, including own brands like the critically acclaimed zombie action franchise Dead Island, action role-playing games from the Sacred world, successful adventures such as the Secret Files series and the role-playing realms of Risen. Deep Silver has announced upcoming highlights such as Sacred 3 and Dead Island Riptide. For more information please visit www.deepsilver.com

Koch Media is a leading producer and distributor of digital entertainment products (software, games and films). The company's own publishing activities, marketing and distribution extend throughout Europe and the USA. The Koch Media group has more than 18 years of experience in the digital media distribution business, and has risen to become the number one distributor in Europe. It has also formed strategic alliances with numerous games and software publishers: Capcom, Kaspersky Labs, Paradox Entertainment, Sega, Square Enix, Tecmo-Koei, THQ, and System 3 etc. in various European countries. With Headquarters in Planegg near Munich/Germany, Koch Media owns branches in Germany, England, France, Austria, Switzerland, Italy, Spain, the Nordic regions, Benelux and the USA. www.kochmedia.com

About XSEED Games
XSEED Games was formed in November 2004 by a small group of industry veterans with a common vision: to cross-pollinate the avid gaming cultures of Japan and North America. Delivering unique, innovative titles across multiple platforms and genres, XSEED Games is dedicated to publishing products that appeal to and enrich the North American market. The company is a 100% wholly-owned subsidiary of Tokyo-based MarvelousAQL Inc., a publicly-traded company listed on the Tokyo Stock Exchange. More information on XSEED Games can be found at www.xseedgames.com.

Windows, Xbox, Xbox 360, and Xbox LIVE are trademarks or registered trademarks of the Microsoft group of companies.

" ?, ?PlayStation? and ?PS3? are trademarks or registered trademarks of Sony Computer Entertainment Inc. All Rights Reserved.