Nordic Games injects ?Medieval Horror? into PKHD for the most goresome gameplay yet 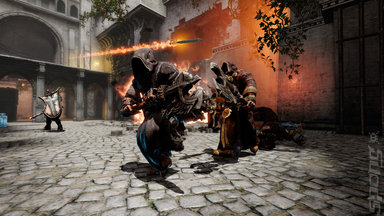 Players now need to fight even harder to break Daniel Garner through the infernal gates of hell. The DLC pack introduces new epic boss battles against the White Demon and Assassin Greed who was named in remembrance of an assassin, John P. Greed.

The Medieval Horror multiplayer pack expands on Survival mode - players can now progress through a map in the same way they would in campaign mode while playing co-op. Fiends can now be destroyed using new environmental weapons in scenes of horrific demon slaying.

?We wanted to intensify the hellish experience for players and the Medieval pack certainly does that,? Reinhard Pollice, Production and Business Development Manager at Nordic Games. ?The PC fans cannot get enough of the pain and are always asking us for more, so we wanted to give them exactly what they want.?

Painkiller Hell & Damnation was released for PC on October 31st2012. The campaign features an all-action crusade that can be played in single player mode, co-operative mode across four chapters, and several multiplayer-modes. A vast array of demons and fiends will be encountered along the way.

About Nordic Games GmbH
Nordic Games GmbH is a wholly owned publishing subsidiary of Nordic Games Holding AB. Founded in 2011, the Vienna/Austria based company Nordic Games GmbH puts great emphasis on its extensive game catalogue. The core portfolio comprises products and brands which have recently been acquired from JoWooD Entertainment AG and DreamCatcher Interactive Inc., and further IPs and trademarks will follow.

The company will pursue the long-term goal of delivering quality products that live up to expectations of gamers worldwide. For more information, please visit www.nordicgames.at.

About The Farm 51
The Farm 51 is a Polish video game developer focused on high quality action games for both the PC and current generation of gaming consoles. Founded in 2005 by industry veterans, The Farm 51 currently employs persons responsible for such titles as the original Painkiller, The Witcher and Two Worlds II.

The Farm 51 is best known for its first person shooters NecroVsioN and NecroVisioN: Lost Company as well as, the extremely successful PC casual game StoneLoops! and Time Ace for the Nintendo DS. Currently, the company is headquartered in Gliwice, Poland with additional offices in Katowice and employs nearly 50 people. The Farm 51 is listed on NewConnect (a share market run by the Warsaw Stock Exchange) as of March, 2012.
Companies: Nordic Games The Farm 51
Games: Painkiller: Hell & Damnation