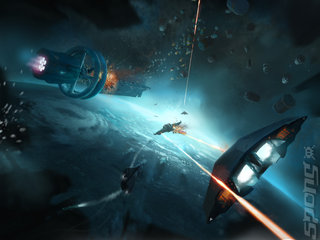 All Images (10) »
3rd January 2012. Cambridge, UK: Frontier Developments (?Frontier?) is delighted that its Kickstarter campaign for the ?Elite: Dangerous? game has reached its funding target of Ł1.25M attracting over 21,000 backers.

?Thank you to everyone who helped us reached that total ? it?s incredibly heartening and uplifting to see so many people supporting Elite: Dangerous,? said David Braben, CEO of Frontier and co-author of the original Elite. ?The help, feedback and ideas given and the enthusiasm shown has been remarkable, vividly illustrating the power of the community which is a force to be reckoned with in today?s connected society. This has made us even more determined than ever to produce a game worthy of such support and engage even further throughout development.?

The Kickstarter project http://kck.st/YN6rVC is still accepting pledges until midnight GMT/7pm EST on Friday 4th January 2013 as the team pushes towards stretch goals of Mac support and increased numbers of playable ships, in response to requests from the community. A PayPal payment option is also available via Frontier?s website elite.frontier.co.uk which will continue to accept contributions after the Kickstarter project closes.

The Elite: Dangerous Kickstarter campaign has generated over 100,000 comments so far on the project?s page, which Frontier believes is a current record for the site.

Elite: Dangerous is due for release on PC in March 2014.

About Frontier
Frontier Developments is an established game development company with 235 talented developers in the UK and Canada who have used Frontier?s own state-of-the-art technology to deliver an outstanding track record of high quality games for publishing partners such as Microsoft, LucasArts, Atari and Sony.
Companies: Frontier Developments
People: David Braben
Games: Elite: Dangerous