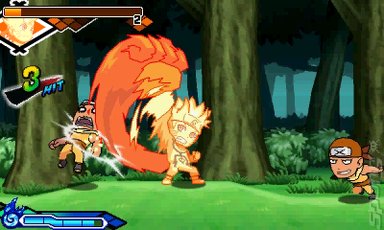 All Images (5) »
CERGY-PONTOISE, FRANCE ? 21 December 2012 ? NAMCO BANDAI Games Europe is pleased to announce that NARUTO Powerful Shippuden for Nintendo 3DS? will be coming on March 8, 2013. NARUTO Powerful Shippuden was developed by Inti Creates with production support from CyberConnect2 Co., Ltd. and brings to the table a side-scrolling action fighting game with an anime twist. The game is based off of the new anime series NARUTO SPIN-OFF: ROCK LEE & HIS NINJA PALS, the latest series in the hit NARUTO and NARUTO SHIPPUDEN anime franchise, allowing players to take the role of either whisker-faced Naruto Uzumaki or bushy-eyebrowed Rock Lee and enjoy lively ninja missions directly based off of their animated storylines.

Rock Lee?s eyebrows aren?t the only things that are oversized in NARUTO Powerful Shippuden. Similar to the NARUTO SPIN-OFF: ROCK LEE & HIS NINJA PALS art style, the comical animations in the game feature oversized caricature heads and humorous on-screen expressions and actions designed to entertain and appeal to gamers of all ages. The pick-up-and-play gameplay allows even casual and young gamers to enjoy busting out flashy moves and special attacks throughout the game?s various stages. Players will be able to take the ninja brawl from the training fields to the forests to the mountains during both night and day.

NARUTO Powerful Shippuden includes a Story Mode as well as an Endless Battle Mode so players can choose to either follow a progressive storyline or just pull out the punches for a sprightly ninja showdown. The action-packed gameplay allows players to earn experience points to power up their vivacious characters and also use the touch screen to strengthen special attacks. Fans will recognize their favorite characters from the NARUTO franchise such as Kakashi, Sakura, Gaara, and many more; all can be called upon as support characters in the midst of battle. With familiar friends at their sides and ninja moves up their sleeves, players will embark on the journey of becoming a powerful Leaf ninja to knock out opponents or even become a knock-out with sexy jutsu.

NARUTO POWERFUL SHIPPUDEN will be available for Nintendo 3DS? on the 8th of March 2013. For more information on the game please visit www.facebook.com/Narutogames,
And Check the video on NARUTO channel:
http://www.youtube.com/playlist?list=PL193BAFEF6BE62E9D


About NAMCO BANDAI Games Europe S.A.S.
NAMCO BANDAI Games Europe S.A.S., part of NAMCO BANDAI Holdings Inc., is a leading global publisher and developer of interactive content for platforms including all major video game consoles and PC, with marketing and sales operations in 50 countries across Europe, the Middle East, Africa and Australasia.  The company is known for creating and publishing many of the industry?s top video game franchises, including PAC-MAN?, Tekken?, SOULCALIBUR?, NARUTO?, NARUTO SHIPPUDEN?, Dragon BallŪ, GALAGA?, RIDGE RACER? and ACE COMBAT?.  More information about the company and its products can be found at www.namcobandaigames.eu or www.facebook.com/namcobandaigames.europe.