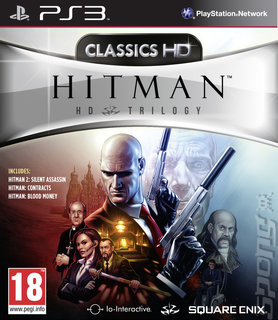 For the very first time experience over forty incredible missions across three classic Hitman Games, all presented in glorious HD. Whether you?re a long-time fan or new to the franchise, this is the opportunity to take on the contracts that defined the series and fully established Agent 47 not only as a pop culture icon, but also as the World?s Ultimate Assassin.

The HITMAN: HD TRILOGY is scheduled for release in Europe and across PAL territories on February 1 and in North America on January 29, 2013 for the PlayStation®3 computer entertainment system, and Xbox 360.

About the Hitman franchise:
The creation of IO Interactive?, the Hitman franchise got its start in 2000 with the release of Hitman: Codename 47 for PC. It has become an award-winning, multi-million selling videogame franchise. Agent 47, the games? iconic central character, is a genetically enhanced clone, engineered into a highly skilled assassin. The franchise has boasted videogames, a major motion picture, books, comics, merchandise collectibles and amassed a voracious global fan base. Agent 47 celebrates his long awaited comeback with HITMAN: ABSOLUTION, now available across North America, Europe and PAL territories for the PlayStation®3 computer entertainment system, Xbox 360® video game and entertainment system from Microsoft and Windows PC.

About IO Interactive
IO Interactive, a Square Enix Studio, is the creative force behind some of the most talked-about multiplatform videogames to emerge in the last decade. Starting with the praised and ground-breaking Hitman series, IO Interactive has since developed the cult classic ?Freedom Fighters?, the controversial ?Kane & Lynch" series and the adorable "Mini-Ninjas". Dedication to creating original IP and unforgettable characters and experiences are the hallmarks of IO Interactive.

More information on Square Enix, Inc. can be found at http://www.square-enix.com