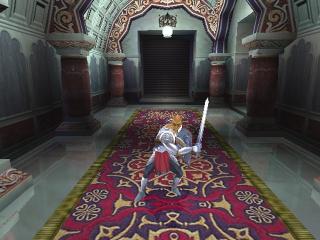 All Images (2) »
THQ Inc today unveiled Summoner 2 exclusively for the PlayStation 2 computer entertainment system. Developed by THQ?s studio, Volition, creators of Red Faction, Summoner 2 is the sequel to one of the top-selling role-playing games for PlayStation 2. Featuring an enhanced game engine, stunning graphics and a compelling storyline, Summoner 2 is scheduled for release in fall 2002.

?Summoner 2 is a truly balanced adventure that concentrates equally on game play and storyline in order to deliver a true role-playing experience,? said Mike Kulas, president, Volition. ?Designed from the ground up to take advantage of PlayStation 2, Summoner 2 features expansive environments detailed with refined graphics, an all new real-time combat system, and a cast of distinctive party members to choose from, each with their own abilities and attributes.?


In Summoner 2, players guide Pava, Queen of the Halassar, and a host of unique party members through an original fantasy universe inspired by literature, folklore and mythology. Players travel to more than 30 exotic and imaginative locales, from the tropical isle of Teomura to the bizarre and dreamlike City of Masks. Players may fully customize their party with their own set of skills and spells. A sequel to the top-selling role-playing adventure and PlayStation 2 launch title, Summoner 2 features a complex, character-driven storyline, hundreds of skills and spells, and an all new, real-time combat system that breaks the mold for traditional RPGs. For more information and artwork visit www.summoner2.com