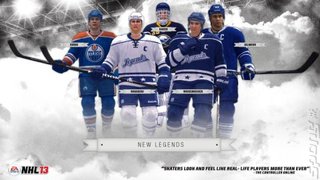 NHL Hall of Famers Doug Gilmour, Jari Kurri, and NHL legend Dominik Hasek will also be added to the roster of legends which includes the likes of Wayne Gretzky and Mario Lemieux. The NHL 13 demo is available for download now via Xbox Live and PlayStation Network. Promising the biggest year on year innovation to the franchise on this console generation, NHL 13 will be available on September 11, 2012 in North America and September 14, 2012 in Europe.

The addition of women's hockey legends as playable characters within the EA SPORTS NHL franchise is the continuation of a commitment that the development team made to create greater representation for women's hockey beginning with NHL 12.

"With the release of NHL 12 we added generic female characters in our Be a Pro mode based on a request from a 14-yr old female fan who emailed our staff because she felt underrepresented as a hockey videogame fan," said Dean Richards, General Manager, NHL, EA SPORTS. "This year we are very excited to continue our effort of creating a more representative experience for female hockey fans by adding two of the greatest female athletes to ever play the game in Wickenheiser and Ruggiero to NHL 13."

"The EA SPORTS NHL franchise took a big step last year by including female characters to create a more inclusive experience for female hockey fans," said Hayley Wickenheiser. "I'm excited to be a part of NHL 13 and hope that the addition of women's hockey legends will encourage greater participation in hockey from young women everywhere."

Legends in NHL 13 will be integrated across several modes:

Be A Legend ? gamers will experience the glory of playing their entire Be A Pro career as a legend as they attempt to shatter the most impressive records in hockey, achieve legendary milestones and complete legends tasks.
Legends teams ? Play as the legends team, Team Ruggiero or Team Wickenheiser, which are comprised of legends and current NHL greats in head-to-head play ? within Play Now, Online and Battle for the Cup modes. Players on Team Ruggiero and Team Wickenheiser were selected by each athlete, respectively.
Hockey Ultimate Team & Be a GM ? Gamers will have the ability to add legends to any team roster in Be a GM mode, or collect ultra-rare legends cards and use them within their Hockey Ultimate Team experience.

Headlined by all-new True Performance Skating, and supported by an innovative new A.I. system dubbed EA SPORTS Hockey I.Q., NHL 13 will deliver a revamped gameplay experience that accurately captures the speed, creativity and strategy of NHL hockey. In addition, NHL 13 will also deliver new experiences that connect hockey fans to their friends and the real world of hockey with the all-new GM Connected and NHL Moments Live modes.

NHL 13 is in development at EA Canada in Vancouver and is rated E10+ by the ESRB and PEGI 12; visit www.esrb.org and www.pegi.info for more information. Become a fan of EA SPORTS NHL on Facebook at http://www.facebook.com/easportsnhl and follow us on Twitter via http://www.twitter.com/easportsnhl.

In fiscal 2012, EA posted GAAP net revenue of $4.1 billion. Headquartered in Redwood City, California, EA is recognized for a portfolio of critically acclaimed, high-quality blockbuster brands such as The Sims?, Madden NFL, FIFA Soccer, Need for Speed?, Battlefield? and Mass Effect?. More information about EA is available at http://info.ea.com.

NHL and the NHL Shield are registered trademarks of the National Hockey League. NHL and NHL team marks are the property of the NHL and its teams. © NHL 2012. All Rights Reserved.