Sold Out gets Worms Again! 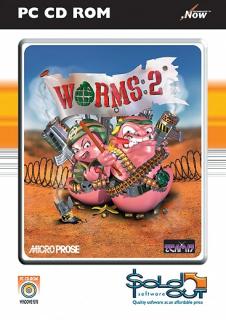 The sequel to one of Sold Out's most successful Ł4.99 titles of all time comes to the super-budget label in February, as Team 17's Worms 2 joins the best-selling PC range.

Worms 2 continues the gung-ho battles of the series, with players controlling a party of four heavily armed worms as they are sent into battle against human or CPU-controlled rival factions. Using the bazookas, air strikes, explosive sheep and shot guns on offer, players use skill and judgement to navigate the randomly generated stages and blow their rivals away. Victory is awarded to the last worm standing.

The original Worms is one of the biggest selling titles under the Sold Out banner, and Team 17's ongoing series has amassed sales of over 5 million units. The franchise will also continue to grow in 2002, with Sold Out's Ł4.99 release of Worms 2 coinciding with the release of Team 17's Worms Blast for PC and PlayStation 2 through Ubi Soft and Worms World Party on Game Boy Advance.

"Sold Out is widely recognised as a pioneer in the field of PC budget titles, and we are extremely pleased to be linking up with them again for the Ł4.99 debut of Worms 2," commented Team 17's Commercial Director Debbie Bestwick. "After the success of the original game as part of the label, we are confident Worms 2 will be every big a hit for both Sold Out and Team 17."

Worms 2 will be released as one of six, still-to-be-announced PC titles in February. As with all Sold Out's Ł4.99 range, it will feature the .Now installation and support software and will be released in a DVD case.
Companies: Sold Out Team17
People: Debbie Bestwick
Games: Worms 2 Worms Blast Worms World Party

May|'16
OlliOlli2: XL Edition and NOT A HERO: SUPER SNAZZY EDITION Get May Release Date for Xbox One
Jul|'18
EA Sports NHL 19 Invites Hockey Fans into Open Beta
May|'18
“The Power of Football” Continues with PES 2019
May|'18
FINALISTS GEAR UP FOR VOLKSWAGEN R DiRT WORLD CHAMPIONSHIPS