The full game download is available for $59.99 through the PlayStation®Store. 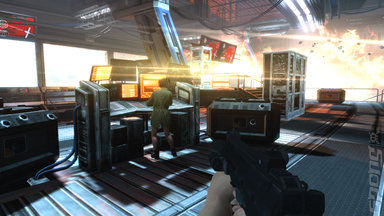 Based on the original screenplay, GoldenEye 007: Reloaded introduces brand new ?Mi6 Ops Missions? ? new, distinct levels additional to the single-player campaign that span the varied environments from the story. The game challenges players to complete different Assault, Elimination, Stealth and Defense objectives all showcased in HD and running at a smooth 60-frames per second.

GoldenEye 007: Reloaded was built on a brand new engine that delivers the gritty, lethal action of Daniel Craig?s James Bond at 60 frames per second with stunning visuals, lightning fast gameplay and the ability to play using the PlayStation®Move sharp shooter. The game is brought to life with an updated story penned by the Hollywood screenwriter from the original GoldenEye film, Bruce Feirstein; the voices of Daniel Craig as James Bond and Judi Dench as ?M?; and combat animations motion-captured by Daniel Craig?s film stunt double, Ben Cooke.

GoldenEye 007: Reloaded was developed by Eurocom, under license from EON Productions Ltd. and Metro-Goldwyn-Mayer Studios, Inc. (MGM), and is rated ?T? for Teen by the ESRB.

About EON Productions/Danjaq, LLC
EON Productions Limited and Danjaq LLC are wholly owned and controlled by the Broccoli/Wilson family. Danjaq is the US based company that co-owns, with MGM, the copyright in the existing James Bond films and controls the right to produce future James Bond films as well as all worldwide merchandising. EON Productions, an affiliate of Danjaq, is the UK based production company which makes the James Bond films. The 007 franchise is the longest running in film history with twenty-two films produced since 1962. Michael G Wilson and Barbara Broccoli took over the franchise from Albert R ?Cubby? Broccoli in 1995 and have produced some of the most successful Bond films ever including CASINO ROYALE and QUANTUM OF SOLACE. They are currently producing the 23rd film, SKYFALL.

Activision maintains operations in the U.S., Canada, the United Kingdom, France, Germany, Ireland, Italy, Sweden, Spain, Norway, Denmark, the Netherlands, Australia, China and the region of Taiwan. More information about Activision and its products can be found on the company?s website, www.activision.com.