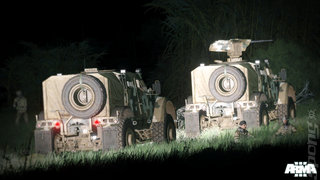 All Images (6) »
Comm-intercept - After months of radio silence, Bohemia Interactive has revealed some of its plans for Arma 3 in 2012. In a freshly released developer's blog post, Project Lead Dan Musil announced the studio's presence at E3/Gamescom, reported plans for a Community Alpha and ordered in six brand new screenshots.

Arma 3 will be exhibited at E3 (June 5-7) and Gamescom Cologne (August 16-19). For many this will be the first opportunity to experience what has been accomplished so far and to get a sense of what is to come. However, that is not all. For the first time ever in the Arma series, Bohemia Interactive is planning a 'Community Alpha'. This will let people try out an early playable build of Arma 3 and help the team with development.

Dan Musil on the Community Alpha:

"Following E3, we plan to open up the game to our players. This process starts with the release of a playable build of Arma 3. We call it the 'Community Alpha'. It's intended to enable people who'd like to try the game early on in development help us to shape it up - and make Arma 3 the greatest release of the series. Ours is a large and complex game - being developed by a relatively small team - so we really appreciate your opinions, thoughts and feedback.

The Community Alpha will be quite limited in terms of the assets it includes, with the goal of providing enough content to experiment with the brand new bits of gameplay and technology. It also enables our passionate community to prepare their mods for the very latest version of the Real Virtuality engine. Then, later on in the year, we'd like to open up our game up even further with a more extensive beta program. The exact details, however, we intend to set out closer to their launch."

Musil also mentioned the development team's strong focus on backward compatibility, meaning that people should be able to get older assets into Arma 3. As a final note he unveiled the team's plans for a series of blog posts to keep Arma enthusiasts informed on development: "We're in the process of putting together a couple of developer's blog posts starting with sound recordings and our field trip to Limnos."

The entire blog post on this year's plans for Arma 3 can be found here.

For all the latest information, please visit [url=www.arma3.com[/url] or track us via our social channels: