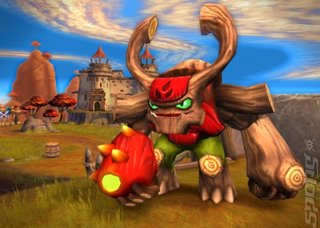 SANTA MONICA, Calif., Feb. 7, 2012 /PRNewswire/ -- Bring Your Toys To LifeTM. This novel premise takes a monster step forward with the worldwide unveiling of Skylanders Giants, the follow-up to the most successful kids' IP launch of the year.(1) Activision Publishing, Inc., a wholly owned subsidiary of Activision Blizzard, Inc. (Nasdaq: ATVI), will debut the sequel at the North American International Toy Fair in booths 3151 and 3251 at the Javits Center in New York City from February 12-15.

Skylanders Spyro's Adventure uniquely combined collectible real-world toys with an epic virtual game world, creating a new platform for communal play that was embraced by parents and kids everywhere. Skylanders Spyro's Adventure was the #1 best-selling kids' franchise worldwide in 2011, as well as the #1 overall new IP launched in North America, according to The NPD Group, Charttrack and GfK.

(1) According to The NPD Group, Charttrack and Gfk

According to The NPD Group, Skylanders Spyro's Adventure went on to become a Top-10 seller in North America and generated the greatest overall single-year sales, inclusive of software and accessories, of any new children's IP in North America, since NPD has been tracking the category.

Skylanders Giants builds upon the breakthrough fundamentals of the first game—merging the physical and virtual realms with an innovative line of cross-platform toy figures that have "brains," which players everywhere can magically bring to life in the world of Skylands. This next installment of the franchise features a variety of new characters, new challenges, a thrilling new story-driven adventure, and advanced integration across console, handheld, mobile and online:

Going Big: Skylanders Giants introduces eight new highly collectible figures that are more than twice the size of the main skylanders cast in both physical and virtual form. Their in-game powers and abilities reflect their colossal scale.
Bright Lights: Helping to further the real world magic of bringing toys to life, Skylanders Giants includes a set of characters that feature spectacular new light technology integrated into the toys, allowing the figure to light up when near or on the Portal of Power™. These characters have additional in-game benefits as well. Batteries are not required.
Brand New Skylanders: Eight new regular sized skylanders, each with their own unique powers, abilities, and personality, join the adventure alongside the Giants.
Forward Compatibility: Every beloved character from Skylanders Spyro's Adventure is 100% compatible with Skylanders Giants, leveled-up stats and customizations intact.
Wider Worlds: Portal Masters will see all new arenas and more gameplay options in Battle Mode for exciting head-to-head play, as well as enhanced Elemental Zones, new Hero Challenges, and other features that encourage players to collect and level up every character.

"Skylanders Spyro's Adventure's success in 2011 validated an exciting idea—that with the right technology, and the creative minds to support it with engaging characters and story, we could define a new model for children's play," said Eric Hirshberg, CEO of Activision Publishing. "Skylanders Giants marks the evolution of this core concept. We've got super-sized figures, remarkably cool new characters that light up, as if by magic, and more ways to play and explore Skylands than ever before. We're delighted to announce the title at Toy Fair 2012 and can't wait for fans to go hands-on this fall."

Toys"R"Us has reaffirmed its commitment to Activision and the Skylanders franchise, and will remain a marquee retail partner for the launch of Skylanders Giants. "While it was still in development, we recognized the potential that Skylanders had to connect with our customers due to its unique merging of physical and digital play," said Jerry Storch, Chairman and CEO, Toys"R"Us, Inc. "The game was an enormous success last holiday shopping season, and the toys seem to evaporate as soon as they arrive on our store shelves. We're excited to continue our enthusiastic support for Skylanders with a comprehensive, global marketing program to introduce Giants to our customers."

Skylanders Giants is developed by Toys For Bob, an Activision studio located in Novato, California. The game is not yet rated by the ESRB. For more information, visit www.skylandersgame.com

About Toys"R"Us, Inc.
Toys"R"Us, Inc. is the world's leading dedicated toy and juvenile products retailer, offering a differentiated shopping experience through its family of brands. It currently sells merchandise in more than 1,570 stores, including 858 Toys"R"Us and Babies"R"Us stores in the United States, and more than 510 international stores and 200 licensed stores in 33 countries and jurisdictions. In addition, it exclusively operates the legendary FAO Schwarz brand and sells extraordinary toys in the brand's flagship store on Fifth Avenue in New York City. With its strong portfolio of e-commerce sites including Toysrus.com, Babiesrus.com, eToys.com, FAO.com and babyuniverse.com, it provides shoppers with a broad online selection of distinctive toy and baby products. Headquartered in Wayne, NJ, Toys"R"Us, Inc. employs approximately 70,000 associates worldwide. The company is committed to serving its communities as a caring and reputable neighbor through programs dedicated to keeping kids safe and helping them in times of need.

Activision maintains operations in the U.S., Canada, the United Kingdom, France, Germany, Ireland, Italy, Sweden, Spain, Norway, Denmark, the Netherlands, Australia, South Korea, China and the region of Taiwan. More information about Activision and its products can be found on the company's website, www.activision.com.[/i]