Barbican is proud to announce Game On, the first major UK exhibition to explore the 40-year history of computer gaming (1962-2002 and beyond). 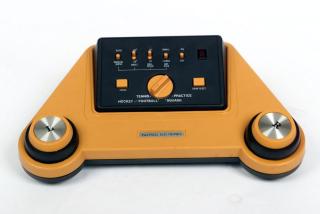 Ingersoll Electronics Pong
All Images (4) »
On show from 16 May - 15 September 2002, the exhibition will explore the creativity and influence of computer games on contemporary culture.

"Game On is going to be a spectacular exhibition," says Conrad Bodman, the Barbican's resident curator. "It will identify key creative individuals involved in software design, and explain crucial developments in hardware technology from the primitive colossal computers of the early sixties to the Game Cube. There will be some unique material and objects in the show and lots of interactive opportunities for visitors".

Says Lucien King, guest curator, "The exhibition has taken us around the world from Europe and America to Japan in search of all of the good things that have come from games. Anybody who is an avid gamer or has a mild interest in electronic entertainment, will not want to miss out on this show. It's never been done before to this extent and is going to go down a storm with young and old alike."

Over 250 exhibits will be displayed in an exciting and specially created environment. Game On will be based on 11 themed sections exploring a wide variety of areas. These will include early arcade games - featuring the very first arcade game - Computer Space (1971); the creative process of games - highlighting key individuals who have been responsible for the development of games such as Core Design the creators of Tomb Raider and Maxis developer of The Sims.

The exhibition will also feature original artwork and prototypes of the games. The section entitled Games Families offers the chance for visitors to play over 40 games from action to simulation. The impact of film and music on computer games will be explored as well as an area especially designed for under 18s in mind, featuring artwork, handhelds and games stations that reflect both historical and current games. The cultural links and differences between games developed in Europe, North America and Japan, will be examined, and a section dedicated to the future of computer games with the latest examples of hardware and software will be featured.