In dark, troubled times, a man will rise up to change the face of an Empire. 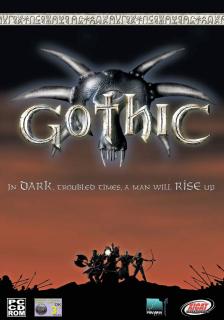 Against the backdrop of a landscape savaged by war, the King of the human territories must find enough ore to forge weapons for his army to use in defence against the Orc Hordes. The King's mines are set in a large magical sphere and are worked by prisoners captured from across the kingdom. And it is into this sphere that you are thrown, charged with the task of delivering a letter - a letter that might just mark the turning point in the war against the Orcs.

According to Steve Brown, Xicat's Director of European Sales, 'This is probably one of the most anticipated releases in the genre of RPG, the title has been in development for 4 years and has achieved excellent sales at its German launch back in March of this year. I am sure that we will see equal success for the title throughout Europe and the USA'.

The Gothic world is constantly changing and evolving: events will occur that can alter the relationships between several groups of characters. NPCs are fully rounded with their own daily habits and relationships: they get up, work, go to bed, chat with each other and so on. More significantly, monsters cooperate with each other and are able to figure things out; they have individual perception. Some can be lured with food or noise, some will run away from bright light. Some can only hear or detect movement.

Michael Hoge, Chief Designer at Piranha Bytes warns, 'Every monster has his own strengths and weaknesses, which are there to find. Whoever dares to blunder into every fight chopping his way through monsters ten to the dozen, will soon find the tables turned - on himself!'

It is the attention to detail that has been lavished upon the individual which has helped to create such a convincing social structure and has resulted in Gothic being brought so effectively to life.

Stefan Nyul warns, 'The inhabitants will reprove you if you do something wrong and help you if you help them. But they also have enemies, that think differently. What you do matters, it makes a difference to the inhabitants and to life as you know it.........'.

Throughout the game you will encounter many different riddles - the solving of which will enable you to locate more powerful weapons or better equipment. It is possible, however, to still progress through the game solving only the simpler riddles.

Alex Bruggemann, Production Manager at Piranha Bytes comments, 'We have taken great care to make the game control as easy as possible - you won't have to keep a constant eye on a mass of character statistics. After all, it's much more fun to concentrate on the story and the world around you without being thrown of course by a few numbers'.

Each character has the ability, with the correct training, to improve particular skills as the game progresses: training with the master of the sword, for example, will result in a character displaying noticeably more skilled swordsmanship. It is so much more satisfying to witness the effect of the skills you have learnt when they are visible in your character as oppose to a meaningless number rating, improving say, from 8 to 10. These 'optical' improvements are for the whole range of skills included in Gothic. The two different classes of magic (which are absolutely independent from each other) work along the same lines.