The Early Worm Catches the Birdie on PlayStation®Network, Steam and iOS 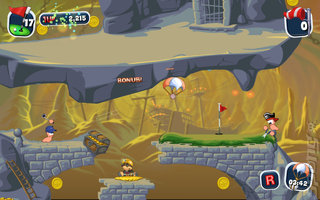 All Images (11) »
London, UK ? August, 2011 ? Britsoft stalwarts and golfing enthusiasts Team 17 today announced the latest outing for everyone?s favourite garden invertebrates. Worms? Crazy Golf is a brazenly bonkers mixture of classic 2D Worms? and hilarious eighteen-hole high jinks. Spread across a variety of weird and wonderful courses and featuring some mind-bendingly mental power-ups, this is the craziest golf you?ll ever play, and is set for release later this year for PlayStation®3 from PlayStation®Network, for iPhone, iPod touch and iPad, and also for PC from Steam?.

"Who could have known that two of our favourite things would work so well together?? says Team 17 Head of Design John Dennis, in his finest chequered trousers and snazzy sweater. ?While probably not an obvious combination, Worms? Crazy Golf is an irreverent mash-up of our own turn-based strategy game "Worms" and everyone's favourite turn-based game of ?hitting little balls with sticks?.?

With many fan-favourite features from the Worms? universe such as the sheep, old woman, mole, magnets, mines and crazy chain reactions making an appearance, it is anything but a straight simulation. Set across three surreal 18-hole golf courses plus a diverse range of skill-based challenge modes, expect to be challenged by increasingly puzzling hole design and an array of obstacles; from castles that teleport your ball, cannons that shoot it across the landscape and even obstructive comedy bats! Only skilful shot execution and clever use of special powers such as the parachute ball, or the ability to slow time down will see you hit par and progress to the next hole.

"We've had a great deal of fun playing the game in multiplayer during development,? Dennis continues, ?and with four-player social multiplayer support, it has all the hallmarks of the "Worms" brand: the trash-talking, pressure to make the shot, terribly unhelpful ?advice? from opponents, and often hilarious consequences when that risky shot that could have won the game goes terribly wrong. If players get half as much enjoyment out of it as we've already had, then we'll be very, very happy."

Worms? Crazy Golf releases later this year, and is set to change the way you think about worms, golf and social, hot-seat multiplayer gaming!

More information on Worms? Crazy Golf will be coming soon to www.team17.com and http://www.facebook.com/WormsTeam17

About Steam
The leading online platform for PC games and digital entertainment, Steam delivers new releases and online services to over 25 million PC users around the world. For more information, please visit www.steamgames.com.

About Team17 Software Ltd
Team17 Software Limited (Team 17) celebrated its 20th anniversary in 2010 and headquartered in West Yorkshire, England, it is a leading independent developer and digital publishing company. Founded in 1990, the company develops and publishes interactive software worldwide for digital game systems, personal computers, wireless devices and the Internet. More information about Team17 products can be found at www.team17.com.
Companies: Team17