Paramount Digital Entertainment and NASCAR Give Players Their Shot to Take on Characters from the Film and Today?s Top NASCAR Sprint Cup Drivers on NASCAR Race Tracks 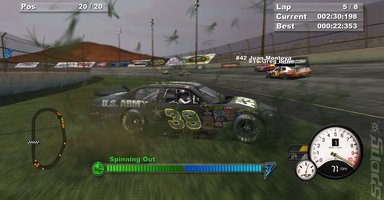 LOS ANGELES ? August 26th 2010 ? Paramount Digital Entertainment, NASCAR, Sony Computer Entertainment of America (?SCEA?) and Piranha Games today announced the upcoming launch of Days of Thunder: NASCAR Edition, a stock car arcade racer that will be available exclusively on the PlayStation Network for the PlayStation«3 (PS3?) computer entertainment system this summer. Days of Thunder: NASCAR Edition gives players the opportunity to go head-to-head against select NASCAR Sprint Cup drivers, including champions such as Jimmie Johnson, Jeff Gordon, and Tony Stewart, and the drivers from the iconic ?Days of Thunder? film from Paramount Pictures. Featuring multiple single-player and online multiplayer modes, gamers will take the wheel as one of the hottest drivers on the circuit to prove that ?you can?t stop the thunder!?

?Racing against NASCAR drivers such as Jimmie Johnson and Mark Martin and ?Days of Thunder? characters Cole Trickle, Rowdy Burns, and Russ Wheeler simultaneously is something that could only happen in a video game, and a great way to celebrate the 20th anniversary of the film,? said Tom Lesinski, president of Paramount Digital Entertainment. "We are pleased to team up with SCEA and NASCAR to bring fans an adrenaline packed, one-of-a-kind arcade racing experience.?

In Days of Thunder: NASCAR Edition, players will join Rowdy Burns? team as the latest rookie to tear up the NASCAR circuit. With Rowdy as their coach, players will learn to hit the pit, upgrade their ride and trade paint with other cars. They can even ?drop the hammer? like Cole Trickle for a boost of extra speed. Rowdy Burns will be voiced by the actor from the film, Michael Rooker, also known for his roles in ?Mallrats,? ?Eight Men Out? and ?Cliffhanger.? Days of Thunder: NASCAR Edition comes equipped with twelve NASCAR-sanctioned tracks, including Daytona International Speedway« and Talladega Superspeedway«.

"With more than 38 million users worldwide, PlayStation fans are turning to PlayStation Network more than ever for unique downloadable games," said Rob Dyer, senior vice president of publisher relations, Sony Computer Entertainment America.Ā"Offering a robust multiplayer racing experience, Days of Thunder: NASCAR Edition is a great example of exclusive content that can only be found on PlayStation Network."

As players race to the top of the scoreboard, they will unlock car customization options and bonus tracks. Depending on how players place in races, take the lead in laps, and pick up new sponsors, they will win in-game currency necessary to refuel, make pit stops, and upgrade their cars. Players? driving styles will be monitored by an in-game tracking system, allowing players to be approached by like-minded sponsors.

In Days of Thunder: NASCAR Edition, up to 12 people can race to the finish online, log the fastest times on the leader boards, or push themselves to the limit in single-player. There are four different modes ? Quick Race, Time Trial, Career, with circuits of varying difficulty, and Derby Mode, where players are encouraged to deal as much damage as they can.
Days of Thunder: NASCAR Edition will be available on PlayStation Network this summer.

About NASCAR
The National Association for Stock Car Auto Racing, Inc. (NASCAR) is the sanctioning body for one of North America's premier sports. NASCAR is the No. 1 spectator sport ? with more of the top 20 highest attended sporting events in the U.S. than any other sport, and is the No. 2 rated regular-season sport on television. NASCAR races are broadcast in more than 150 countries and in 20 languages. NASCAR fans are the most brand loyal in all of sports, and as a result more Fortune 500 companies participate in NASCAR than any other sport.