Battlefield Bad Company 2 Vietnam has be hailed a better game than Call of Duty: Modern Warfare 2... 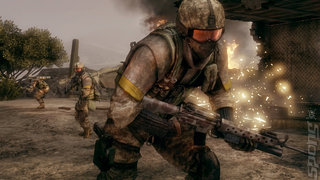 All Images (3) »
DICE, an Electronic Arts Inc. (NASDAQ: ERTS) studio today announced the first multiplayer Expansion Pack for the mega-hit Battlefield: Bad Company 2 where gamers will find themselves in an entirely new theatre of war ? Vietnam. Fighting as either U.S. Marines or North Vietnamese Army (NVA), the hostile combat terrain of the Vietnamese jungle is brought dramatically to life via the Frostbite engine with a host of authentic vehicles and weapons with which to engage the enemy. The punishing jungles, powerful air invasions, and guerilla tactics of an unpredictable enemy deliver non-stop action in this sandbox environment, a signature design style of the award-winning Swedish studio. With more than 5M units sold, Battlefield: Bad Company 2 has been hailed as, ??a better game than Call of Duty: Modern Warfare 2? by Seth Schiesel of The New York Times.