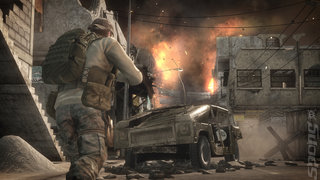 All Images (7) »
In today?s war, there is a new enemy, new weaponry and a new warrior built to tackle the toughest missions and harshest terrain. Today Electronic Arts Inc. (NASDAQ: ERTS) announced a Limited Edition version of Medal of Honor that will grant players exclusive access to the MP7, a unique weapon. Limited Edition owners will also benefit from day-one access to the TOZ-194 and 870MC2 shotguns, while others must rank up to secure these weapon unlocks. Gamers can pre-order the Limited Edition now at www.medalofhonor.com at no additional cost.

?Access to a weapon like the MP7 will allow players to experience a tool developed with the Special Operations Community in mind, ?said Greg Goodrich, Executive Producer of Medal of Honor. ?With its light weight, high rate of fire and its ability to penetrate body armor, the MP7 handles like a pistol yet allows targets to be engaged like a rifle.?

For the first time in its 11-year history, Medal of Honor leaves the WWII theatre and enters the modern day setting of war-torn Afghanistan told through the lens of a small band of fictional characters. Medal of Honor introduces players to an elite warrior and relatively unknown instrument of the U.S. Military that operates under the National Command Authority, taking on missions no one else can handle.
Companies: EA LA
Games: Medal of Honor