All new ways to bring the pain on Xbox LIVE Arcade! 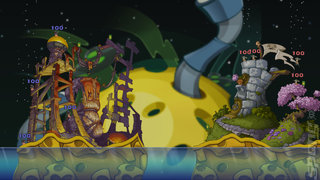 All Images (7) »
A certified number one bestseller, Worms 2: Armageddon is still the title of choice for thousands of gamers across the globe. With this in mind, Team17 are thrilled to release the feature-packed Worms 2: Armageddon Battle Pack on Xbox LIVE Arcade, a new downloadable content pack containing new weapons and utilities, a new single-player campaign, tons of crazy new customization features, new achievements and an all-new game mode amongst other upgrades to the original smash hit.

The Body Count mode pits a single worm against a never-ending army of enemies, with the aim being to amass the largest number of kills before eventually being laid to rest with your own signature tombstone. Your high scores will be tracked on an all-new Leaderboard, so it?s easy to see whose worm is harder than yours!

With 30 new singleplayer Deathmatches, new ?Warzone? theme and a cluster (grenade) of new weapons and utilities including termites, ferrets and worship statues there is plenty to keep the average Wormer occupied; 10 brilliant new Forts and new items to customize your team mean that it?s now even easier to remember who you blasted off the landscape in previous matches, and which players pounded you into the dirt.

May|'16
OlliOlli2: XL Edition and NOT A HERO: SUPER SNAZZY EDITION Get May Release Date for Xbox One
Jul|'18
EA Sports NHL 19 Invites Hockey Fans into Open Beta
May|'18
“The Power of Football” Continues with PES 2019
May|'18
FINALISTS GEAR UP FOR VOLKSWAGEN R DiRT WORLD CHAMPIONSHIPS