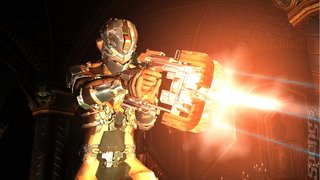 All Images (8) »
Hours before engineer Isaac Clarke begins his adventure on “The Sprawl” in Dead Space 2 a Necromorph outbreak occurs – but how did the events unfold? Players will witness the horror first-hand when Visceral Games, an Electronic Arts Inc. (NASDAQ: ERTS) studio releases Dead Space Ignition, an all-new downloadable game that takes place on the Sprawl and challenges players to survive the initial Necromorph outbreak. Dead Space Ignition will be available in Fall 2010 on Xbox LIVE Marketplace and the PlayStation Network.

“Dead Space Ignition is the first of many exciting game extensions we have planned for the launch of Dead Space 2,” said Steve Papoutsis, Executive Producer on the Dead Space franchise. “The interactive comic-style game will give Dead Space fans a unique perspective on the events leading up to Dead Space 2, and will also introduce the storyline to a brand-new audience of gamers.”

Dead Space Ignition combines an interactive comic-style story with three unique hacking mini games; Hardware Crack, Trace Route and System Override. Each game offers a fun and satisfying arcade experience that will challenge players with puzzles and twitch gameplay. Dead Space Ignition features a unique “Choose Your Own Adventure” type narrative, allowing players to survive the horrific Necromorph outbreak in multiple ways. The game offers four unique endings and upon completion of each one, players will be rewarded with unlocks including an exclusive suit, all of which can be used by Isaac Clarke in Dead Space 2 when the game releases on Jan 25, 2011.

Dead Space 2 recently won various prestigious awards at the Electronic Entertainment Expo, including ‘Best Action/Adventure Game’ from top media outlets including Game Informer, GameSpot, GameSpy and Machinima.com. Dead Space 2 also won GameSpot’s highly-coveted ‘Best Xbox 360 Game’ award.
In Dead Space 2, engineer Isaac Clarke makes his return in a blood-curdling new adventure on an all-new space installation known as “The Sprawl.” The lone survivor of a horrific alien infestation, Isaac finds himself confronting a catastrophic new nightmare. Battling dementia, Isaac will do whatever it takes to save himself and dominate the relentless enemy onslaughts. Equipped with a new arsenal of tools to dismember the necromorphs, Isaac faces the challenge head-on. Players will see Isaac fight bigger, scarier and more epic battles that will keep them on the edge of their seats.
Companies: EA Square
Games: Dead Space 2