Xbox 360 Primes Every Passion With Games That Rock, Race and Sizzle 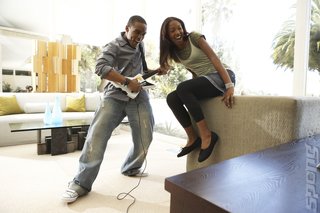 LOS ANGELES ? June 1, 2009 ? Rock out. Duck and cover. Shift into overdrive. On the eve of the Electronic Entertainment Expo (E3), Microsoft Corp. today made it perfectly clear: No matter who you are or what games you crave, Xbox 360 is the only gaming and entertainment console for you.

At a time when, according to NPD Group Inc., nearly seven in 10 consumers plan to spend the same or more on video games compared with last year, Xbox 360 today unveiled a lineup that is sure to tip the scales in favor of more ? more fun, more entertainment value and more games available only on Xbox 360.

"We know that your fun and our success boil down to one thing: our ability to make games that are creative, diverse and entertaining. Period. And this year, we deliver in spades with the biggest and best lineup in our history," said Phil Spencer, general manager of the global Microsoft Game Studios business. "From the core first-person-shooter fans who?ve enjoyed Xbox since the first Halo to new audiences who are discovering us today with genre-defining games like 1 vs 100, we have something for everyone with our best and broadest lineup ever.[/i]

Xbox 360 has the most celebrated, most played, most coveted and most E-rated games in the industry ? and with 1,000-plus titles to date, there?s more than one for you.

Get behind the wheel of an Audi R8 V10 in Forza Motorsport 3, jump into the immersive movie-like action of Alan Wake, and download Shadow Complex, the newest Xbox LIVE Arcade game from the minds behind the blockbuster Gears of War franchise. Some of the most exciting games in 2009 and beyond are only on Xbox 360, including the following:

· 1 vs 100 (Microsoft Game Studios). Are you ready to win big? The 1 vs 100 U.S. and Canadian beta launches today, June 1, at 7:30 p.m. PDT. For the first time, 1 vs 100 on Xbox LIVE combines the best of TV gameshow experiences with social gaming to create the largest interactive game show in the world. Based on the hit TV game show of the same name, 1 vs 100 Live is regularly scheduled and features a live studio host who provides comedic commentary throughout the show and fresh content from a team of trivia writers and experts. Players can play as the one, the mob or the crowd, for the chance to win real prizes. Check your local Xbox LIVE listings to join 1 vs 100 Live.1

· Alan Wake (Remedy/Microsoft Game Studios). Alan Wake is the all-new psychological action thriller from the renowned creators of the Max Payne franchise. Coming in spring 2010 and exclusive to Xbox 360, Alan Wake will immerse players in an intense cinematic thrill ride of dreams and reality, where light is the only ally.

· Crackdown 2 (Ruffian Games/Microsoft Game Studios). The sequel to the award-winning Crackdown, Crackdown 2 is the premier open-ended action experience that lets you be judge, jury and executioner for a vast city. Coming exclusively to Xbox 360 in 2010, Crackdown 2 will take multiplayer2 gaming to unprecedented levels for the ultimate cooperative and competitive multiplayer experience, providing you and your friends with the complete freedom to explore, destroy and play as you return to restore justice and peace to Pacific City ? by any means necessary.

· Forza Motorsport 3 (Turn 10/Microsoft Game Studios). Launching this October, Forza Motorsport 3 is the definitive racing game for everyone from hardcore tuners to anyone who?s ever dreamed of driving at full-throttle. Backed by breathtaking HD graphics and bone-jarring physics, you?ll take the wheel of more than 400 of the most-beloved cars on over 100 renowned real-world tracks and exotic road courses from around the globe. Forza Motorsport 3 includes driving assists and adjustable skill levels to make the game a gripping pick-up-and-play experience for audiences of all ages and skill levels, while new customization and sharing tools will further fuel the imaginations of the thriving Forza Motorsport community on Xbox LIVE.

· Halo 3: ODST (Bungie). Launching Sept. 22, Halo 3: ODST is a new game in the landmark Halo saga that lets players experience the events leading up to the epic story told in Halo 3 through the eyes of a special forces ODST (Orbital Drop Shock Trooper). In addition to an all-new campaign, ODST includes three new Halo 3 multiplayer maps and the complete, stand-alone Halo 3 multiplayer experience.2 The game also introduces Firefight, an exciting new cooperative multiplayer mode that pits up to four players against increasingly challenging waves of enemies. As a special bonus, Halo 3: ODST also includes an invitation to the Halo: Reach multiplayer beta on Xbox LIVE. Also, launching on the same date with Halo 3: ODST is the Halo 3: ODST Collector?s Pack, which offers Halo fans a new and exclusive wireless controller and the game title in one package at a great price.

· Joy Ride (Big Park/Microsoft Game Studios). Avatars, start your engines! Full of wild driving fun, Joy Ride will get your adrenaline pumping as you tear up the track with your friends, or jump, flip and trick your way through the Stunt Park as you work with the whole community to unlock rewards. Joy Ride is completely free to download and gives you all new ways to play, whether you?re looking for a quick game or a deep, custom social experience, all on Xbox LIVE.2 Design your dream car or purchase new tracks, game modes and avatar items. You can share the racetracks and game modes with your friends so no one is ever left out.

· Shadow Complex (Epic Games Inc. and Chair Entertainment Group/Microsoft Game Studios). New from Epic Games and Chair Entertainment, Shadow Complex combines the best of old-school side-scroller design with modern, cutting-edge gameplay and incredible high-definition graphics. Collect power-ups, discover new abilities and evolve your character into a force of destruction as you explore an original story set in the world of Orson Scott Card?s best-selling novel, Empire. Shadow Complex marries the quality and depth of a full retail title with the accessibility you love, exclusively on Xbox 360 and Xbox LIVE Arcade.

Blockbusters Here, There, Everywhere on Xbox 360

It?s a simple truth: third-party games play better on Xbox 360. Why? Because only Xbox 360 can pair must-have titles like this year?s blockbuster from Infinity Ward, Modern Warfare 2, The Beatles: Rock Band and Tony Hawk: RIDE? with Xbox LIVE, the world?s largest social network on your TV. The result? As the world?s largest online gaming network, Xbox LIVE gives you more friends to play with and its exclusive collection of Game Add-ons ensures the fun never ends. It leaves only one question: Why would you play these blockbusters anywhere else?

· Final Fantasy XIII (Square Enix). The world-renowned Final Fantasy will continue making its home on Xbox 360 with the upcoming release of Final Fantasy XIII, the eagerly anticipated title from Square Enix. Final Fantasy XIII uses the power and cutting-edge technology of Xbox 360 to deliver seamless transitions between real-time gameplay and in-game cinematics as gamers summon the courage to execute powerful attacks with an evolved Active Time Battle system and ultimately fulfill their destiny. Scheduled to be released only in North America and Europe.

· Modern Warfare 2 (Infinity Ward/Activision). On Nov. 10, 2009, Infinity Ward will make its return with the release of Modern Warfare 2 on Xbox 360, the most-anticipated game of the year and the sequel to the best-selling first-person action game of all time, Call of Duty 4: Modern Warfare?. Modern Warfare 2 continues the gripping and heart-racing saga with an unprecedented level of action as players face off against a new threat dedicated to bringing the world to the brink of collapse. Xbox LIVE gamers will also be the first to get their hands on two Modern Warfare 2 map packs coming first to Xbox 360.

· The Beatles: Rock Band (Harmonix/MTV Games). On 09.09.09, The Beatles: Rock Band will allow fans all over the world to pick-up the guitar, bass, mic or drums and experience The Beatles? extraordinary catalogue of music through gameplay that takes players on a journey through the legacy and evolution of the band?s legendary career. In addition, The Beatles: Rock Band offers Beatles fans the opportunity to rock out with new hardware replica controllers modeled after instruments used by John Lennon, Paul McCartney and Ringo Starr throughout their careers. And, for the first time, players will be able to download music and make a change: Available only on Xbox 360, all Apple Corps, MTV Games and Microsoft proceeds from downloads of All You Need is Love will benefit Doctors without Borders.