The skinny from Microsoft 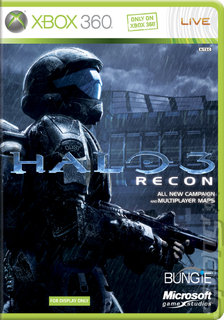 Developed exclusively for Xbox 360 by acclaimed developer Bungie, ?Halo 3: Recon? is a stand-alone expansion that extends the award-winning ?Halo 3? experience with hours of new campaign and multiplayer gameplay.* The release adds a new dimension to an all-encompassing universe that gamers around the world have known and loved for more than six years.

The new campaign chapter predates the events that unfold in ?Halo 3? and gives players a new perspective through the eyes of a new hero in the ?Halo? universe. New multiplayer maps ensure that the award-winning Xbox LIVE experience of ?Halo 3? continues to thrive.

Top features include the following:

? All-new campaign content. The ?Halo 3: Recon? campaign is an intriguing side story that takes place during the terrifying events leading up to the Master Chief?s return to New Mombasa in ?Halo 3.? Experience the fate of Earth from the brand-new perspective of a special forces ODST (Orbital Drop Shock Trooper), adding a unique outlook and new gameplay elements to the events that unfold in the trilogy?s finale. While the feel of this new chapter will greatly resemble that of previous ?Halo? experiences, ?Halo 3: Recon? will require players to employ more elements of stealth and cunning than ever before.

? A new hero: Prepare to drop. Known for their courage, valor and, at times, insanity, ODSTs are among the fiercest UNSC soldiers, priding themselves on being the first unit deployed into hostile situations. While not as large or supernaturally gifted as their Spartan comrades, these ?Hell Jumpers? more than compensate with their ferocious attitudes and unwavering nerve.

About ?Halo?
?Halo 3? is the conclusion to the epic trilogy and picks up where ?Halo 2? left off, answering questions about the fates of the beloved protagonist Master Chief and his artificial intelligence sidekick Cortana as they struggle to save humankind from destruction at the hands of the alien coalition known as the Covenant. In addition to the rich storyline, ?Halo 3? continues the franchise?s grand tradition of delivering innovative online multiplayer experiences via Xbox LIVE.

Developed by Bungie and published by Microsoft Game Studios, the ?Halo? franchise is exclusive to the Xbox 360 video game and entertainment system and is optimized for the Xbox LIVE online entertainment network. ?Halo 3? was released in 37 countries and 17 languages. To date, more than 24.8 million copies of the games in the ?Halo? trilogy have been sold worldwide.