Capcom Presents, Devil May Cry An Astonishing Mikami Masterpiece For The PS2

From the gaming genius that brought us Resident Evil. 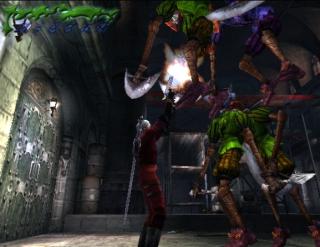 All Images (2) »
Capcom®, a leading worldwide developer and publisher of video games, today presents Devil May Cry, a new "gothic action" game for the PlayStation®2 computer entertainment system. Designed by Resident Evil creator and mastermind, Shinji Mikami, Devil May Cry tells the story of Dante, the descendent of a legendary swordsman who has waged a one-man battle against the demon world in order to carry out a 2000 year-old revenge. Scheduled to release in November, Devil May Cry is already the most anticipated PlayStation 2 game for fall 2001 in the trade, press and consumer communities, described as a destined-to-be blockbuster release. A playable demo of Devil May Cry will be distributed with the highly anticipated September release of Resident Evil Code: Veronica X. Devil May Cry will carry an "M" rating by the Entertainment Software Rating Board rating.

Devil May Cry boasts the following features:
· The quality of game graphics and animation are instantly recognized as far and above all other PlayStation 2 titles.
· Shinji Mikami, the original producer and Hideki Kamiya, the original director of Resident Evil 2 are reunited for the first time since the creation of the massive original and Resident Evil 2 blockbuster.
· Possesses an incredibly dark and gothic tone with an artistically crafted art style.
· Unsurpassed particle effects and light-sourcing set a new standard in video game realism.
· Introduces an all-new level of character control allowing amazing depth of character movement.

As the lead character in Devil May Cry, Dante is a dark figure shrouded in mystery. Legend has it that 2000 years ago, in the depths of hell, a demon swordsman, awoke to justice and rebelled against the devil, waging a one-man war in support of the human world. 2000 years later, Dante, a private investigator of the supernatural, realizes that the devil is rallying to rise again against mankind. How does Dante fit into this gothic puzzle? Deep within Dante's blood lies the power of ancient demons and as his power builds he transforms into a demon state where he can inflict unearthly powers on the retched souls he encounters. As Dante continues his adventure he will find powerful weaponry including his dual-pistols and shotguns. Dante will discover powerful swords, each possessing various elemental powers. This devil hunter will lead players into the fantastic dark world as Dante's destiny is played out in a gothic battle of good against evil. If Dante is successful, the Devil May Cry.

As he seeks revenge for the past, Dante will face many evil beings, including:

· Demonic marionettes - These low-class demons put their souls into emotionless marionettes. These creatures normally are slow but can move surprisingly fast when attacking humans.
· Death - These beings encompass death and are similar to grim reapers. Death beings can hover in the air and travel through walls. They use over-sized scissors or a scythe as their weapons of choice.

· Phantom - These high level demons rule all other demons in the old castle. They are huge, ugly creatures that resemble spiders with a dark aura. These creatures are more intelligent than humans and are capable of fierce magic using fire or ground-shaking power.

"Devil May Cry is simply amazing. It will certainly raise the bar in the world of PlayStation 2 games," says Todd Thorson, director of marketing, Capcom Entertainment. "Devil May Cry takes full advantage of the technical advancements of the PlayStation 2 computer entertainment system by delivering stunning graphics and gameplay that immerses gamers into a dark fantasy world. Capcom Executive Producer, Shinji Mikami has created another masterpiece."
Companies: Capcom