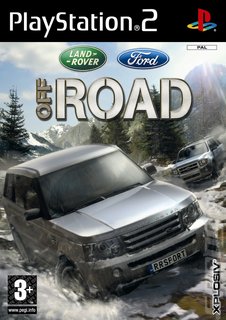 LONDON, ENGLAND, January 10th, 2008 - Xplosiv, a wholly owned subsidiary of Silverstar Holdings (NASDAQ: SSTR), has announced it will be releasing Off Road from its highly regarded and best selling Ford license series, for the PlayStation 2?, PSP? (PlayStation Portable), Wii? and PC.

Off Road takes the multi-million selling Ford franchise away from the tracks and urban streets of its predecessors, to rugged, tough terrain for the very first time. Off Road also marks the introduction of the prestigious Land Rover brand, synonymous like Ford, with a rich heritage of producing pioneering off road vehicles.

Players can now race some of the world's toughest off road trucks, 4x4's and SUV's through beautifully detailed environments, stunning, scenery and wide sweeping tracks designed for rough-tough, high-speed racing.

Ian Higgins, CEO of Empire Interactive, said, "Off Road is an exciting step forward for the Ford franchise. We have some impressive vehicles, stunning environments and great new features. The introduction of the Land Rover brand has brought real excitement and an even stronger appeal to the franchise."

Clive Kabatznik, CEO of Silverstar Holdings, added, "The release of Off Road illustrates Empire's ability to continually garner new interest from already successful licenses. We are thrilled to be introducing the Land Rover brand and the mass market appeal that having two truly global brands will bring."

With real time, on-the-go vehicle damage repair, acceleration faster than any previous Ford game, and alternative routes. Off Road brings a plethora of new and exclusive features to test players driving prowess at high speed. The racing has never been this exhilarating!

Off Road is scheduled for release on 21st March 2008 for the PlayStation« 2, Sony PSP and PC at an RRP of Ż19.99 The Wii version will be released during Q2 2008.
Companies: Xplosiv Software
People: Clive Kabatznik Ian Higgins
Games: Off Road