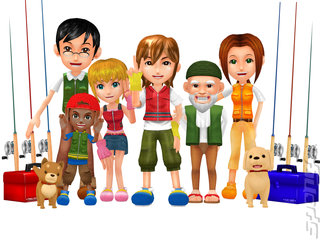 Fishing Master
Konami Digital Entertainment GmbH has announced the first titles to emerge from its recent publishing agreement with Hudson Soft. Fishing Master and Sports Island have both been created specifically for the Wii? and will be released in Q1 and Q2 2008 respectively.

Fishing Master makes full use of the motion-sensitive Wii Remote and Nunchuk controllers, and is a fun simulation allowing users to test their angling skills as they attempt to catch over 100 species of fish. Players use the Wii Remote to cast their line, aiming for the silhouettes of fish in the game?s beautifully-realised lakes. With the line cast, the Nunchuk is then used to reel in any catches by rotating the analogue stick. However, with the fish putting up valiant fights to get free, careful movement of the Remote is needed to counter their thrashing movements.

Fishing Master boasts a wealth of gameplay modes, with a Tutorial easing users into the intricacies of the game, while solo anglers can opt to earn points by catching rare fish and ultimately receiving the esteemed Fishing Master accolade, or can attempt to catch every species in the game to complete a graphic Fish Encyclopedia. Certain quests and special tournaments offer fishing further variety and let you explore new areas rich in fish. Four players can also compete simultaneously in the game?s multi-player mode, each attempting catch bigger and rare fish than their rivals!

Sports Island is an altogether more athletic offering, pulling together ten sporting events and pushing the player to their limits. Players are invited to play addictive Adidas-endorsed versions of Beach Volley, Football, Badminton, Basketball, Curling, Figure Skating, Archery, Moto Cross, Snowboarding and Kart Race. Each uses the Wii Remote and Nunchuk in unique yet accessible ways. As such, a subtle swing of the Wii Remote is used to hit the ball in Volleyball, while subtle twists are needed to ride the slopes in the Snowboarding section.

Up to four players can compete in each event, and, with its entertaining multi-player modes and varied gameplay, Sports Island is an ideal game for players of all ages. Each sport is brilliantly realised and intuitive to play, with sports such as Football and Basketball featuring all the passes and skill of the real thing but without sacrificing immediacy. Similarly, the likes of Figure Skating and Curling demand precision from the player and a different range of skills, guaranteeing hours of entertainment as players attempt to climb the in-game leader boards at the expense of their friends.