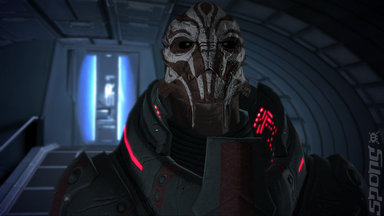 Nihlus Kryik is one of the Citadel Council?s most decorated Spectre agents. Born in a small mercenary outpost outside Hierarchy space, he learned the hard way to fight for anything he wanted. His father died when he was 16, and his mother forced him to join the turian military. His outsider status made life difficult; though he was always at the top of his class, his superiors and peers never truly accepted him.

As a soldier, Nihlus? skills were unquestionable. His attitude, however, often got him in trouble. On several occasions, he disobeyed direct orders to do what he thought was best. Although his instincts were usually proven right, his notoriety grew. Even when he single-handedly routed an enemy patrol, and saved his squad from ambush, his commanding officers berated him for his recklessness. His military career seemed to stall before it even began.

After being reassigned to a new squad for the third time, Nihlus was introduced to Saren Arterius, a fellow turian and a Spectre. Saren was impressed with the young soldier. He befriended Nihlus and offered to mentor him. Within a year of meeting Saren, Nihlus was asked to join the Spectres.

Free from the restrictions of military procedure, Nihlus excelled in his new role. He quickly stepped from his mentor?s shadow and established himself as one of the Council?s top agents. Since then, Nihlus has completed countless missions as a Spectre, each one more difficult and dangerous than the last.

Cool under pressure, Nihlus has an uncanny ability to find an enemy?s weakness and exploit it. Though his methods aren?t as brutal as Saren?s, he will not hesitate to efficiently and thoroughly eradicate anything or anyone that stands in his way.
Companies: Microsoft Game Studios
Games: Mass Effect