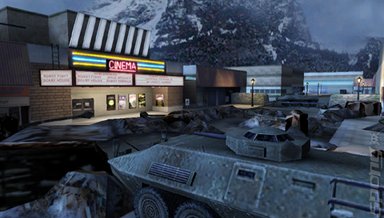 READING, UK (14th August, 2007) - Sierra Entertainment, a division of Vivendi Games, today announced the development of a PSP® (PlayStation®Portable) system exclusive, based on the new Aliens/Predator film, which Twentieth Century Fox releases nationwide on December 25. Designed solely for the PSP System, players will become the ultimate Predator, hunting down and eliminating the Alien species in the authentic universe of the Aliens/Predator movie. The game is being developed by Rebellion, creator of the original highly acclaimed Alien vs. Predator PC game.

"We're pleased to once again partner with Twentieth Century Fox to deliver an engaging interactive extension to the film," said Al Simone, senior vice president, Global Marketing for Sierra Entertainment. "Pitting two of Hollywood's most popular and terrifying monsters against each other, the upcoming Aliens/Predator movie will provide a gripping gaming experience for not only fans of the film, but anyone with a PSP system."

Elie Dekel, Executive Vice President of Fox Licensing & Merchandising added, "The Aliens/Predator franchise is a crown jewel in the Fox portfolio and one of the most exciting properties for interactive content. Sierra Entertainment will create a game that will keep both fans of the films and avid gamers alike engaged for hours of immersive gameplay."

In this third-person action-adventure, players will be an elite lone Predator with an arsenal of exotic weaponry and equipment at their disposal. The game will give access to advanced technologies with the Predator's wrist computer including Pred-tech/thermal vision modes and cloaking, to track, stalk and annihilate both humans and Aliens. Both classic and completely new futuristic weapons such as wrist blades, laser trip mines and dual shoulder cannons will give players the ability to eradicate all traces of the Alien race. With co-op multiplayer mode players will be able to team up with friends wirelessly to play as the Predator's comrades, attempting to withstand hordes of attacking Aliens.

To add to the game's challenging features, an honour point system will evaluate the player's success based on how closely they adhere to the Predator's value system. The higher the honour achievement, the more weapon and armor upgrades available to the player.