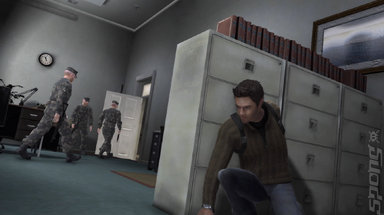 Robert Ludlum?s The Bourne Conspiracy, will give players the experience of becoming a 30 million dollar elite agent, fusing an experience that delves deep into Jason Bourne?s character with gameplay and game presentation inspired by the aggressive filmmaking and frenetic action found in the films. Only by playing Robert Ludlum?s The Bourne Conspiracy will players discover Bourne?s true identity and experience the very moment he became a malfunctioning weapon, first hunting targets around the world as a deadly government assassin then marking himself as his agency?s most wanted.

?Robert Ludlum's best-selling spy novel and blockbuster film adaptation have awed millions with riveting, unforgettable fiction,? said Al Simone, senior vice president, global marketing for Sierra Entertainment. ?For the first time ever, players will be able to experience the shadowy world of expert assassin Bourne, who continues to find himself plagued by splintered nightmares from his former life.?

?With Robert Ludlum?s The Bourne Conspiracy we are not just basing a game on Ludlum?s franchise, we are building upon the universe he introduced with The Bourne Identity,? said Peter Della Penna, president of High Moon Studios. ?High Moon has collaborated closely with Mr. Ludlum?s estate holders, the guardians of his creative vision, since the day we began to develop the game. The goal of that collaboration has been to create a videogame that takes inspiration from known elements within the Bourne universe, elements that have captivated more than a quarter of a billion people around the world, with original story and game play that establishes a signature Jason Bourne game experience. Robert Ludlum?s The Bourne Conspiracy is our installment to the series and is meant to reside on its own within the Bourne entertainment library.?

Robert Ludlum?s The Bourne Conspiracy promises constant tension and action, with players adopting Jason Bourne?s piercing sense of survival, cunning nature, heightened target awareness and firearms training that allow him to engage and eliminate small armies. As a third-person espionage action game, players move from fistfights to firefights to experience sequences that, unlike any other game, seamlessly blend Bourne?s signature hand-to-hand combat with intense shooting and the ability to escape and evade deadly situations.