Everyone's a Kid in EA Playground in Development at EA Canada 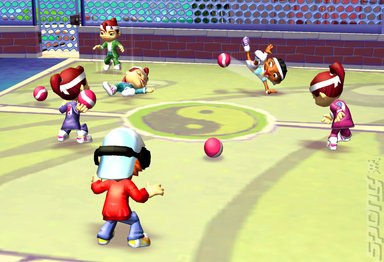 CHERTSEY, UK. – June 18, 2007 – Rain or shine, the fun doesn’t stop! Electronic Arts (NASDAQ: ERTS) announced today that EA Playground™ – an all-new intellectual property in development at EA Canada – is now in development for the Wii™ and Nintendo DS™. Scheduled for release in the autumn, EA Playground captures the exuberance and nostalgia of your neighborhood playground, turning your gaming space into an arena of interactive fun with immersive activities designed for kids, and the kid inside all of us.

“Young, old, male or female -- EA Playground has something for everyone,” said Executive producer Dave McCarthy. “EA Playground transports you to your fantasy playground, packed with interesting characters, over-the top gameplay, and a ton of collectables. Kids can bring the excitement of the playground home, and parents or even grandparents can re-experience their childhood thrills.”

EA Playground features games that are easy to pick-up-and-play by fully capitalizing on the unique control mechanics of both the Wii and the Nintendo DS. Swing the Wii remote to excel in tetherball, blow into the Nintendo DS mic to fire spitballs or battle your friends and family in dodgeball. Every game brings its own twist to the controls for the ultimate, all-ages, party game.

In EA Playground, you don’t always have to be playing with your friends and family in order to have fun. Explore the world on your own as you enter different locations, unlocking new activities, making wacky in-game friends and collecting rewards and stickers to upgrade your abilities along the way.

EA Playground joins a portfolio of blockbuster entertainment in development in EA’s three Canadian Studios, including new IP Skate from EA Black Box, and Army of Two™ and Boogie™ from EA Montreal.