Put away those other racing games because Flatout Ultimate Carnage has just gone gold! 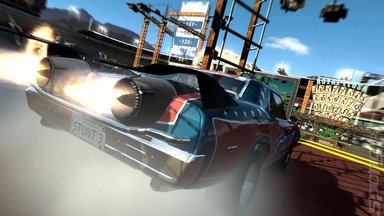 LONDON, ENGLAND, June 14, 2007 - The nitrous tanks are charging and the V8 engines are revving as Empire Interactive, a wholly owned subsidiary of Silverstar Holdings, is excited to announce that FlatOut Ultimate Carnage has now gone gold, and is set to give the green light to the year's most destructive and high-octane Xbox 360™ racer on June 22nd.

Exceeding the already high expectations set for the game, FlatOut Ultimate Carnage has been hailed by the Specialist Gaming media as one of the best looking and technologically advanced racing games on the Xbox 360 platform. "Wow, no seriously WOW!" wrote Xbox 360 World. "We've played it and we're very, very hot for it. Beautiful" said Games Radar. "…set to take the 360 by storm" according to 360 Gamer and "…this really can't be beaten" from Gamesmaster.

The game, owned by Empire and developed by Bugbear Entertainment of Finland, is a gameplay and graphic triumph. Commenting on the completion of the game, Empire European Marketing Manager, Rob Noble said, "It's done! All the hard work is over and FlatOut Ultimate Carnage is ready to hit the primetime and to take its rightful place as the number one destruction racer on the market. This is one game you need to check out for its amazing action, spectacular visuals and just superb action racing!"

Building on the success of FlatOut 2, including multiple Racing Game of the Year awards and its status as an Xbox Live multi-player favourite, European support is focused on Xbox 360 websites and Xbox live marketplace.

"The media is tightly targeted towards 360 specialist websites for front-of-site rich media advertising. Xbox 360 gamers will see the ads more than two million times. This will include video footage of the destruction racing and invite people to enter competitions to win the chance to drive FlatOut Racing Experiences. The video trailer is now on Marketplace, the downloadable playable demo will be next and www.flatoutgame is designed to deliver the feel of the chaotic destruction in FlatOut with video, 3D screens, music and a special focus on the new Deathmatch Derby mode" added Noble.

The first phase of the marketing blitz is to over three million dedicated gamers in Europe through the Xbox Community Network (XCN) and through playable demos made available through Xbox Live. Additionally, the game will receive extensive advertising support through both electronic and print media sources.