Dynasty Warriors to be unleashed on Nintendo DS this August 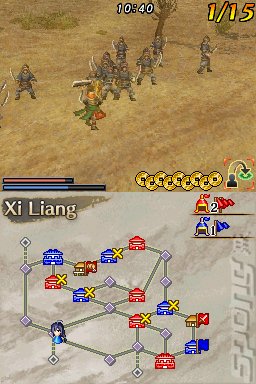 ?We wanted to translate all of the entertainment and challenge that has made the Dynasty Warriors series so incredibly popular on the home consoles, whilst also creating something fresh and exciting that takes advantage of the capabilities of the DS and provides a truly memorable portable Warriors experience.? said Will Curley, Sales Manager for KOEI Ltd.

About DYNASTY WARRIORS DS: FIGHTER?S BATTLE:
Once again players are given the chance to team up with the legendary Dynasty Warriors and strive to unite ancient China in the midst of warring kingdoms and rival soldiers fighting to tear the country apart. The spectacular Musou attacks are once again at your disposal enabling players to unleash stunningly powerful attacks that can wipe out entire squads with just one awesome strike.

Players can choose to take the role of one of three new characters: The Phoenix, The Dragon or The Chimera, with each character possessing a specific special ability, from awesome power to rapid speed. Players can also select up to seven of the original Dynasty Warriors to fight alongside them as officers using the brand new ?Battle Deck? of cards.

The new ?Obstacle Roulette System? gives players the chance to select cards from the ?Battle Deck? which will enable them to unleash spells and attacks that can make the difference between victory and defeat. These will prove especially advantageous in the wireless Vs mode for up to three players, where crafty use of the cards can disrupt your opponent?s challenge and pave the way for their humiliating defeat and your spectacular victory.
Companies: Koei
People: Will Curley
Games: Dynasty Warriors DS: Fighters Battle