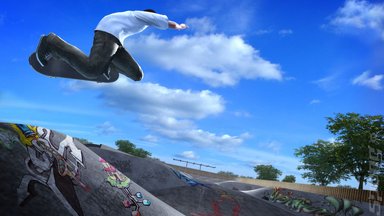 CHERTSEY, UK. ? June 13, 2007 ? Electronic Arts (NASDAQ: ERTS) announced today the complete track listing in SKATE which is set to release Autumn 2007 on the PLAYSTATION®3 computer entertainment system and the Xbox 360? video game and entertainment system. SKATE boasts 45 songs from some of the most influential and celebrated artists including David Bowie, Nirvana, N.W.A. and The Ramones. The game also features 18 exclusive tracks from mixing mastermind XXXChange, skateboarding?s very own legend, Tommy Guerrero, as well as other world renowned DJs.

?The soundtrack for SKATE is a direct reflection of true outlaw skateboard culture," said Steve Schnur, Worldwide Executive of Music and Marketing at EA. ?It's a throwback to the days of underground skateboard videos when skaters created their own soundtracks that raided every genre of music. In that spirit, we talked to hardcore skaters around the country to help pick many of the songs for SKATE. Real recognizes real, and this soundtrack is a straight-up tribute to a culture like no other.?

SKATE is the closest thing to skateboarding without actually putting your feet on a board. With innovative Flickit controls that take advantage of the dual analog sticks and the ability to sculpt tricks that define your own style, SKATE delivers an authentic boarding mecca like no other videogame. Players will explore, find, and own the best spots in the fictitious city of San Vanelona while listening to a soundtrack that?ll get them up and moving. As they cruise through this enormous city, players will capture footage to show off their own style with friends across the world.

To see the full song list and purchase the music from the soundtrack, please visit www.ea.com/eatrax/.

Developed by EA Black Box in Vancouver, British Columbia, SKATE will deliver all the style, fun, creativity and culture of skateboarding without the countless hours of practice, broken bones and hospital visits. SKATE will ship in Autumn 2007 and has not yet been rated by the ESRB. Visit www.esrb.org for updated rating information.
Companies: EA Vancouver Electronic Arts
People: Steve Schnur
Games: skate.