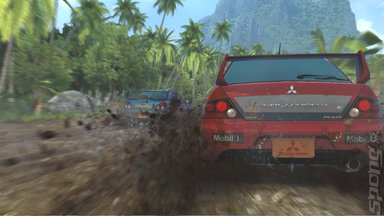 LONDON (12th June, 2007) - SEGA Europe Ltd. today confirmed that SEGA Rally? will be tearing its way onto the PSP® (PlayStation®Portable) system. Scheduled for release during September 2007, SEGA Rally for the PSP is being developed by racing game specialists Bugbear Entertainment Ltd. Already announced for PLAYSTATION®3 computer entertainment system, the Xbox 360? video game and entertainment system from Microsoft and the PC, SEGA Rally is receiving a stream of plaudits from the specialist gaming press for its bumper-to-bumper competitive racing.

SEGA Rally on the PSP encapsulates everything its predecessors laid out when defining the rally genre; amazing visuals, superb handling and closely fought competitive racing. These three key features have been the chassis of development for SEGA Rally on the PSP, combining to bring players a thrilling ride through jaw dropping environments and against competitive AI, all alongside an instinctive handling system that rewards players for pushing their rally-racing skills to the very limit.

"The original SEGA Rally is heralded as one of the all time great video games and this new instalment on the PSP is a great example of updating a classic perfectly for today's machines," said Guy Wilday, Studio Director, SEGA Racing Studio. "With the addition of multiplayer Wi-Fi and online multiplayer, there's scope for players to show off their skills against their friends, whilst the excellent PSP screen exudes all the visual qualities expected of SEGA Rally".

Built from scratch, SEGA Rally on PSP has been developed by Bugbear Entertainment Ltd. with guidance from the SEGA Racing Studio to ensure that the unique character of SEGA Rally shines through on the PSP.

SEGA Rally will be available for the PSP, PS3, the Xbox 360 and PC during September 2007. For more information on this game and other SEGA products please visit www.sega-europe.com
Companies: Bugbear SEGA
People: Guy Wilday
Games: SEGA Rally