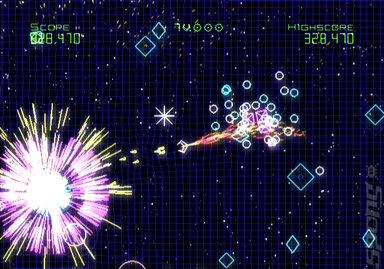 The Geometry Wars: Galaxies videogame delivers an all new mission-based campaign where players blast-off on action-paced quests across the galaxy, defending solar systems one by one, defeating waves of alien enemies on new and classic Battle Grids. The controls have been optimized for Nintendo systems, allowing gamers to use the Wii Remote? and Nunchuk? controller or DS touch screen to execute hotshot moves as never before.

For the first time ever, the Geometry Wars videogame will let players battle via hot seat, co-op, simultaneous and versus in multiplayer mode. Those that own both the Nintendo DS and Wii can link the game together using Wi-Fi to unlock bonus content. Elite players will be able to challenge the universe by posting high scores on the Wii's online leader board.

"The Geometry Wars: Galaxies videogame is an entertaining title blending old-school arcade fun with next-gen gameplay and action," said Al Simone, SVP of Global Marketing for Sierra Entertainment. "We are excited to bring the Geometry Wars brand to the Nintendo platform as both the Wii and DS enable a fun and frenetic experience for gamers."