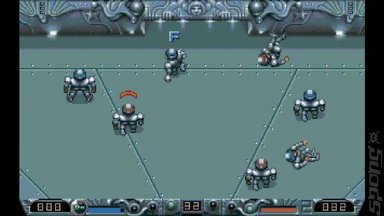 LONDON, ENGLAND, May XX, 2007 - Empire Interactive, a wholly owned subsidiary of Silverstar Holdings (NASDAQ: SSTR), today announced that it will bring the furious excitement of the classic Speedball II: Brutal Deluxe to the Xbox 360? video game and entertainment system from Microsoft via Xbox LIVE® Arcade. The highly anticipated title was recently voted one of the most wanted games for Xbox LIVE Arcade in an article by the Computer and Video Games website. Its arrival will please both hard-core fans and new generations of gamers who have yet to experience what some believe is the finest combat sports game ever made.

The Bitmap Brothers classic, Speedball, was first released for the Amiga in 1990 and quickly became a huge success. However it wasn't until the release of its sequel, Speedball 2: Brutal Deluxe that the title reached new gaming heights and sold over 2 million units. It is still considered by many to be one of the best games of all time. The Xbox LIVE Arcade version is a perfect conversion of Speedball II: Brutal Deluxe but with the addition of an all-new High Definition version, more teams and downloadable content.

This new Xbox LIVE Arcade version of Speedball II will enhance this classic game, whilst still retaining all the classic elements that have made it a firm favorite amongst gamers.

"We are pleased to be bringing this all time classic to Xbox LIVE Arcade," commented Ian Higgins, CEO Empire Interactive. "With its brutal and addictive gameplay, and the ability to play multiplayer over Xbox LIVE, we are sure this will be the definitive version of Speedball"

"This is another example of Empire updating a classic IP and bringing it to a brand new audience. Double Dragon will launch next Wednesday, and will be our first foray onto Xbox LIVE Arcade, our announcement of Speedball 2 demonstrates our continued intention to bring high quality classic titles to a broader market," said Clive Kabatznik, CEO of Silverstar Holdings