The Dream of Neko 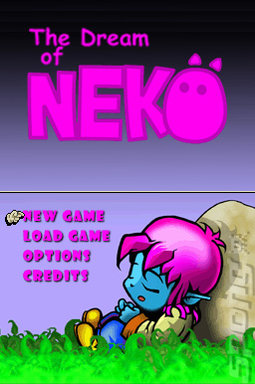 Lexicon Entertainment, a leading publisher and distributor of interactive entertainment software for video game console systems and personal computers world-wide, is pleased to announce the signing of The Dream of Neko for Nintendo DS.

The Dream of Neko is a cartoon styled puzzle game set in a magical world where the lead character has the ability to morph into other creatures which will help in achieving the desired goals within the quest! Inside this beautiful and enchanting world the player will be able to utilize a plethora of powers and weapons including fireballs, funny mimics, etc, complete with stunning visual effects as they traverse the lush and highly detailed settings!

The backdrop story for The Dream of Neko tells of a kitten named Neko who has a fascination for humans and in many ways is envious in that they can eat anything they want, and travel fast using big weird mechanical machines. After a hard day?s hunting in the forest, he decides to rest and swiftly falls asleep but is awoken by a sudden, unusual noise, and blinding light seers through him. Neko felt strange and sensed that something had changed; he was transformed remarkably, he has become human.

Neko soon discovers that it is not so easy being a human and the player will have to control Neko through the 6 worlds of the game to help him to recover/discover his appearance. Neko will meet many creatures trying to stop him, but he can use items and magical powers to oppose them. Neko can also collect invaluable coins scattered across the levels to buy more essential items. Each of the six entrancing settings has its own puzzles to solve and a boss stage to complete to reach the next world!