Turn up the music, raise your hands and voices and join the celebration! 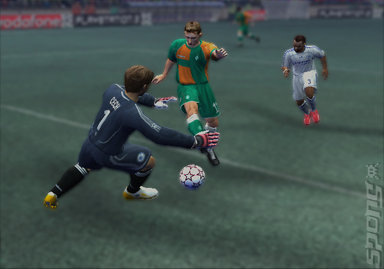 Electronic Arts (NASDAQ: ERTS) today revealed the 11 songs that will set the stage for Europe?s most prestigious club football tournament, the UEFA Champions League?. EA celebrates the passion football fans have for their club teams with adrenaline-pumping music that forms the backdrop for the classic rivalries in-game and enables players to win glory for their club teams in UEFA Champions League? 2006-2007, the only officially licensed videogame of the tournament.

?The UEFA Champions League is an action-packed tournament that brings out the passion football fans have for their favorite club,? said Steve Schnur, Worldwide Executive of Music and Marketing at EA. ?Fans are taken on an emotional rollercoaster as they follow their team through the ups and downs of the tournament and this is the spirit that we wanted to capture for the in-game soundtrack in the official UEFA Champions League 2006-2007 videogame. We have assembled an exhilarating collection of music from around the world that guarantees there?s something for everyone.?

The Xbox 360? video game and entertainment system version of the title introduces a new way to play this beautiful game by introducing a unique and collectable virtual card system in the Ultimate Team mode that enables you to assemble your ultimate team. Using collectable virtual cards, players can hand-pick everything from your players and staff members to your match strategy and stadium. Now you can build your dream team by going online to collect or trade virtual player, staff and gameplay cards. To experience this unique gameplay mode visit Xbox Marketplace in March to download a demo featuring Ultimate Team Barcelona against Arsenal.

The official UEFA Champions League 2006-2007 videogame is developed under the EA SPORTS? brand by EA Canada in Vancouver, B.C. It is scheduled to ship March 20, 2007 on the Xbox 360?, PlayStation«2 computer entertainment system, and the PSP« (PlayStation« Portable) system, and on PC in Europe. It will also be available on the mobile platform in Europe in April. The game is rated 3+ by PEGI. Screenshots can be downloaded at http://info.ea.com.
Companies: EA Vancouver Electronic Arts
People: Steve Schnur
Games: UEFA Champions League 2006-2007