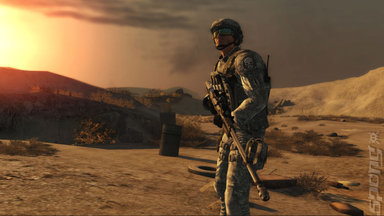 London, United Kingdom ? February 22, 2007 ? Today Ubisoft, one of the world?s largest video game publishers, announced the eminent release on Xbox Live Marketplace of the long awaited multiplayer demo for Tom Clancy?s Ghost Recon Advanced Warfighter ® 2, the follow up to the massively popular squad-based action franchise, and next gen smash hit of 2006. Last year Tom Clancy?s Ghost Recon Advanced Warfighter? blew up the next generation servers on Xbox Live, and the release of the Multiplayer demo on February 26th marks the very first chance for gamers to get a taste of what awaits in the sequel.

After having experienced the explosive action of the single player demo, players will now have the opportunity to experience the challenge and fun of Tom Clancy?s Ghost Recon Advanced Warfighter ® 2 multiplayer by playing both against and with friends. The demo will offer 1 map called ?Outpost? in both adversarial and co-op modes of play, and will support up to 16 players.

Plus...Challenge the developers at Redstorm:
Gamers who download the demo on February 26th will also have the incredible opportunity to be among a select group to challenge the developers to some multiplayer action. All one needs is to submit their Microsoft gamertag, have a ubi.com account and some luck. Sweepstakes will determine the winners who will be invited to play with Red Storm on the MP X360 demo on Feb 28th between 18h-21h GMT. To sign up for this please visit http://ghostrecon.uk.ubi.com/graw2/match.php. The registration will stay open until, Monday the 26th, 18:00 and winners will be informed after this. The gaming session will be in English. For more information on how to participate please visit www.ghostrecon.com.