Armored Core 4 explodes onto PlayStation 3 for the ultimate robot rumble. 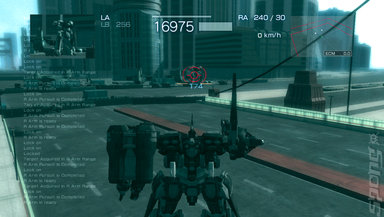 Milton Keynes, UK ? February 19th: Publisher 505 Games is pleased to today announce the April 27th release of Armored Core 4 on PlayStation 3. Armored Core 4 is the latest title in the historic mech-battling action and simulation saga, and is the first ?next-generation? incarnation of the internationally beloved franchise. This dazzling brand new chapter offers the ultimate in fast-paced, high octane mech simulation.

Armored Core 4 exploits the awesome power of PlayStation 3 to deliver astounding visuals and eye-watering special effects, including dynamic lighting and shadows, swirling water and mysterious fog. Mech designs benefit from massively more detailed 3D models and the arenas and environments now offer a giant leap in interactivity and detail. Players can use these interactive features to their advantage, for instance by smashing open arena walls to let in the light and search for enemies, or by hiding in water to ambush rivals.

The classic customisation returns in full effect in Armored Core 4. Every element of the game is designed to offer players the highest possible level of customisation when designing and building their mechs. With just a few simple and intuitive steps, players can augment their creations with serious weaponry, external armour and internal hardware and then fine tune and tweak each unit for best performance. The possibilities are almost infinite! Players are able to test drive their creations in a series of trials and then, when ready for battle, challenge other mechs in order to advance through the exciting tournaments and leagues.

Multiplayer modes feature heavily in Armored Core 4, with deathmatch games and most importantly, full online support for battling with international players as well as exchanging match data, emblems and even entire robot creations.