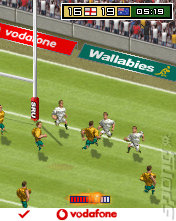 All Images (8) »
Thursday 15th February 2007/? Hot on the successful launch of its RBS 6 Nations Rugby game on all UK networks, Huddersfield-based creator of mobile phone games, Creative North Studios, today announced it has been approached to tackle two more rugby union titles ? this time for the Australian and Fiji National teams.

The deal to develop Wallabies Rule Rugby for multi national content partner Player X and Vodafone Australia, in addition to Fiji National Team Rugby for Two Fruits Group and Vodafone Fiji, comes as a result of Creative North?s burgeoning reputation to produce quality mobile phone titles ? particularly those in the field of rugby ? that are both fun to play and polished to perfection for the mobile phone platform. As with RBS 6 Nations, both games carry the highly sought official branding, adding further to their anticipated arrival over the next few weeks.

Creative North, a prominent member of Game Republic ? a regional alliance of high-tech games companies operating in the Yorkshire and Humber region, is also set to score further success with another home-grown sporting favourite, Subbuteo, to be distributed globally towards the end of February, plus multi-million selling title Tropix in US and Canadian territories. The former points the classic tabletop flick football game in a new direction by delivering full 3D gameplay for all players. Tropix faithfully recreates the great casual gaming experience enjoyed by millions of worldwide PC players.

?RBS 6 Nations laid the foundations for many exciting new opportunities in territories other than the UK,? said Phil Mundy, Managing Director of Creative North. ?We are delighted to be working with our new distribution and development partners in Australia, Fiji and the United States and have a strong first quarter portfolio, which is being further bolstered by the official Subbuteo game.?

Jan|'07
The Only Game In The Village